Yesterday evening, Arnaud Lagardère awarded the 2005 Jean-Luc Lagardère Foundation grants, known as the Bourses Hachette. The 16th annual ceremony was held at the Cité de l’Architecture et du Patrimoine in the Palais de Chaillot, which will open its doors to the general public in 2007. More than 1,000 people from the worlds of politics, the arts and the media were on hand for the event.

This occasion gave Mr. Lagardère an opportunity to describe the foundation’s new scope. Indeed, the organization is branching out from its mainly cultural initiatives into sports sponsorships for low-income neighbourhoods and new corporate patronage programmes in medical and technological research.

Mr. Lagardère believes that “the Jean-Luc Lagardère Foundation must promote French culture and values through its Bourses Hachette grants, while pursuing other activities such as the founding of a media library at the Maison de Solenn/Maison des Adolescents at Cochin hospital. Our foundation puts human welfare first and hopes to stress creativity in everything it does.”

The Bourses Hachette grants seek to support young talent in the fields of writing, video and film, music and the digital arts. Given the high standard of the entries, the Jean-Luc Lagardère Foundation awarded 11 prizes this year instead of its usual eight, granting a total of 197,000 euros, or 5,000 euros more than in previous years. 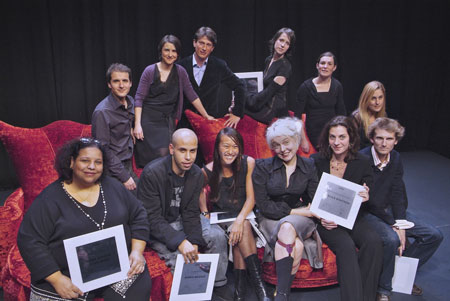 The Writer prize was a tie, awarded to Jessica Nelson (age 25) and Jean-Baptiste Gendarme (age 26), who each received 15,000 euros to write their second novels: the story of a father-daughter relationship for Jessica and of grieving and returning to one’s native land for Jean-Baptiste.

The Movie Producer prize (50,000 euros) was awarded to Boris Briche (age 30) to support the creation of a production company and the making of a film, Le Cirque, a comedy that features three characters from different backgrounds who meet in unlikely circumstances and are forced to live together.

The Digital Artist prize (25,000 euros) went to Nadia Micault (age 27) for use in creating an entertaining artist-promotion site for her friend, the musician Sir Alice.

The Journalist prize (10,000 euros) went to Cécile Bontron (age 27) for her efforts to report on a globalization trend in health-care that is stripping Africa of its nurses and doctors.
A special prize (5,000 euros) was awarded to Armandine Penna (age 29) for her report on immigration channels for Nigerian women.

The Bookseller prize (30,000 euros) was given to Rosa Aoudia Tandjaoui (age 34) to help her revitalize her shop, a real neighbourhood bookstore in the heart of Paris’ 19th arrondissement (district).
A special Innovation prize (7,000 euros) went to Virginie and Mathieu Ducros (29 and 31) to help them expand their Montpellier bookstore, which specializes in “manga” culture.

The Photographer prize (15,000 euros) was awarded to Agnès Dherbeys (age 28) for her efforts to document the evolution of Timor since the tiny country gained its independence in 2002.

The Television Screenwriter prize was not awarded this year due to a shortage of quality entries.