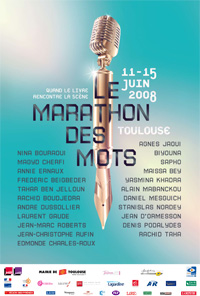 For the fourth annual Marathon des Mots (Marathon of Words), which took place from 11 to 15 June 2008, the Jean-Luc Lagardère Foundation met up with creative young French writers at the Studio of the National Theatre of Toulouse. This programme permits a certain number of journalists – from the Journal du Dimanche, Paris Match, Elle and Europe 1 – to sponsor a young writer with an unusually bold approach to writing. Irène Frain from Paris Match, for example, chose Saphia Azzedine for her novel Confidences à Allah. Several young writers also spoke about their literary influences and sources of inspiration. Among them were former winners of the Jean-Luc Lagardère Foundation’s Writer’s Grant, Florian Zeller (2002 grant winner) and Jakuta Alikavazovic (2007 grant winner and 2008 recipient of the Goncourt grant for a first novel).

Other high points included an encounter with author Edmonde Charles-Roux and a groundbreaking face-off on the theme “The improbability of literary journals” between Pierre Assouline, the writer-creator of the blog “La république des livres” (The republic of books) and Jean-Baptiste Gendarme, 2005 Jean-Luc Lagardère Foundation grant winner and driving force behind the literary review Décapage. This review was developed with support from the Jean-Luc Lagardère Foundation.

The Jean-Luc Lagardère Foundation’s mission includes encouraging new forms of writing in both literature and music, supporting the careers of talented young creators, and providing access to culture for the masses. As the leading patron of young creative talents in France, the Foundation also aims to promote French culture at an international level and make culture a catalyst for social cohesion.
.