“One of Gulli’s missions is to offer children, their parents and others, a positive, generous and active view of the world. Getting to know each other better so that we can live together more harmoniously and be enriched by our differences is the philosophy of life we stand for. And it is one of the reasons we have supported this noble and ambitious project from the very start.
Each year since its inception, Gulli has promoted the International Convention and the International Children’s Rights Day on its airwaves and in the field by taking part in various initiatives, particularly with Unicef. This year, we will be working together again to mark the 20th anniversary of the signature of the Convention on Children’s Rights, through an ambitious undertaking centred around the ‘Portraits/Autoportraits’ project.
This singular and poetic vision is a marvellous way to approach the sensitive issue of children’s rights. It is an ideal starting point to encourage interaction between generations, allow parents to discuss issues with their children and foster a deeper understanding of the world and people around us.” 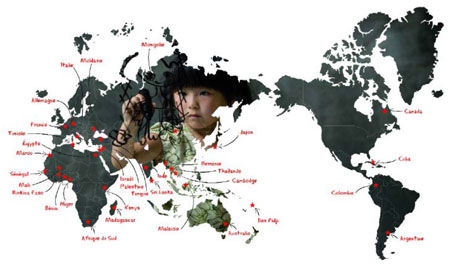 An artistic project combining children’s drawings, photographs and film, which began in a French nursery school in 2005, convinced filmmaker Gilles Porte to embark on a tour of 32 countries on five continents. The public will discover this adventure in a book (published by Seuil, in cooperation with Juliette Robert, with a preface by Bernard Chambaz), through a series of simultaneous exhibitions held in Paris and in over 30 other cities throughout France and abroad, and through 80 short subjects filmed by Porte. The exhibitions, sponsored by SIMV, the Paris City Hall and UNICEF in partnership with Solidarité Laïque, Clowns Without Borders and the Human Rights League, will debut on 20 November 2009, the date of the 20th anniversary of the International Convention on Children’s Rights.

Portraits-Autoportraits, 80 self-portraits of children in 20 countries throughout the world by Gilles Porte, produced with the support of UNICEF and broadcast in the form of short video clips from 9 to 22 November at 7:55 pm on the Gulli channel and on Gulli’s website (gulli.fr). 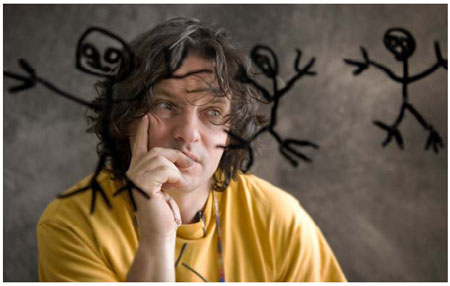 After travelling alone to a dozen or so countries, Gilles Porte came up with the idea – following the example of filmmaker Georges Clouzot in “Le Mystère Picasso” – of filming children in the process of “transparently” drawing their own self-portraits.
Thanks to the support of the production company Gédéon Programmes, he resumed his travels – accompanied by his assistant Samuel Lahu and equipped with two cameras and a pane of glass – on several different continents, filming over 600 children in 20 countries.

Porte entrusted the original music and images of these short films to jazz musician Louis Sclavis and film editor Catherine Schwartz, who took great pains to closely respect the individual characteristics of each drawing. Each of the little characters drawn on the pane of glass by the children was “brought to life” with the help of a dozen or so animators, for the most part from the Ecole des Gobelins school of visual communications.