Home » Communiqués de presse » The Lost Girls of Rome, a new thriller by Donato Carrisi (The Whisperer) published in France by Editions Calmann-Lévy, is slated to hit French bookstore shelves on 1 March

The Lost Girls of Rome, a new thriller by Donato Carrisi (The Whisperer) published in France by Editions Calmann-Lévy, is slated to hit French bookstore shelves on 1 March 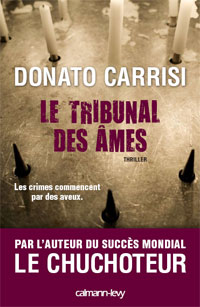 The book
Following on from the success of The Whisperer, Donato Carrisi is releasing a new thriller.
Rome: the good life, the Capitol, crowds of pilgrims and hordes of tourists…but also rain, dark side streets, underground labyrinths and elusive murderers.
Marcus is a man without a past. His specialty is analyzing crime scenes to uncover evil wherever it tries to hide. One year ago, he was severely injured and lost his memory. Today, he is the only person who can shed light on the disappearance of a young girl, the victim of a kidnapping.
Sandra is a photo investigator on the police forensics team. She too looks for clues in the places where life has taken a wrong turn. One year ago, her husband fell from the top of an abandoned building, and she never could believe it was an accident.
Their paths will cross in a church, in front of a Caravaggio painting. They will have to choose between vengeance and forgiveness in a city that still resounds with a thousand years of whispered crimes in the heart of the Vatican, at the border between light and shadow.

The author
Born in Italy in 1973, Donato Carrisi is the Italian author of one of the world’s most successful thrillers. His first novel, The Whisperer, has sold over 300,000 copies in France, has been translated in 20 countries and has won four literary prizes in Italy as well as the SNCF Thriller Award and the Livre de Poche Readers’ Award in the Thriller category.