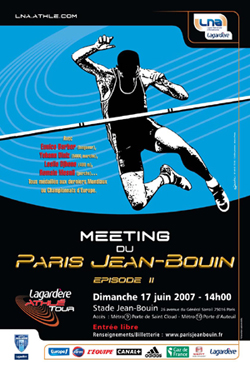 Paris Jean-Bouin and the Lagardère group, the club’s corporate partner and founder partner of the French National Athletics League

The meeting constitutes the second stage of the League’s professional circuit (“Lagardère Athlé Tour”), which takes in five dates in all, in chronological order: Villeneuve d’Ascq, Paris Jean-Bouin, Strasbourg, Reims and Monaco.

Considered the authentic “Mecca” of the international athletics world in the 1930s, the Stade Jean-Bouin will play host during the event to some of the best French athletes: Eunice Barber, Yohann Diniz, Leslie Djhone, Salim Sdiri and Romain Mesnil, as well as stars of world athletics such as the pole vaulter Tim Lobinger and the sprinter Dayron Robles.

The track at the Jean-Bouin stadium, which has witnessed no fewer than six world records (1500 m, mile, 2000 m, one kilometre, 2 miles and pole vault) and two French records (800 m and shot put) will provide the venue at the meeting for a programme rich in emotion and exciting competitions:

is delighted to be hosting this meeting which, he says; “picks up again with the tradition of major international athletics meetings on the track of the Stade Jean-Bouin and also thus promotes the practice of athletics, an Olympic sport and a core one for all sportsmen and women”. The President of Paris Jean-Bouin also hopes that, “this meeting will not be the last and that many others will follow in the future”.

Arnaud Molinié, Acting Director and one of the Lagardère group’s managing partners, adds that, “for the past year, the Lagardère group has been working hand in hand with the French Athletics Federation (FFA), and the “Lagardère Athlé Tour” is tangible proof of the increase in professionalism within the FFA. This sends out a strong signal that the entire sporting world can benefit from”.

On the occasion of this 2007 edition, the “Lagardère Athlé Tour” will enjoy the support of the Lagardère group and radio stations Europe 1 and RFM, as well as the newspaper L’Equipe, Canal+, Adidas, Gaz de France and the Seat group.

Free tickets can be picked up from the Paris Jean-Bouin offices or at the stadium on the day of the event.