The ‘Hachette Foundation’ will become

Established 14 years ago at the behest of Jean-Luc Lagardère, the “Hachette Foundation” focuses its activities on three main sectors of patronage : French in the world, culture in hospital, and grants for young professionals in the cultural and media arenas.

In 2003, during the ceremony for the “Jean-Luc Lagardère” awards, Arnaud Lagardère created and presented a new grant, valued at 25,000 euros, to recognize young musicians with an original and innovative project for the recording of a new CD.

The awards ceremony, which took place underneath the Pyramide du Louvre, on 25 November 2003, was attended by an assortment of key figures from the realms of culture and the media, all on hand to acclaim the new talents recognized in 2003.

During the event, hosted by Michel Field (Europe 1 Radio) and Priscille Lacombe (editor-in-chief of the magazine Toulouse Télévision), eight grants were presented to the winners by the presidents of their respective juries : 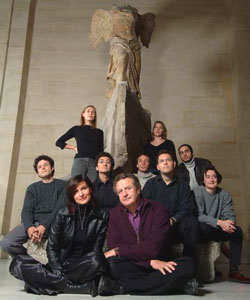 The Young Bookseller Grant (€30,000) was presented to Claire Lesobre, 32, and Anne Lesobre, 35, for their general-interest bookstore concept, Entre les lignes, in downtown Creil.

The Journalist Grant (€10,000) was given to Camille Dattée, 28, for her project to report on young French people aged 16 to 30 who have chosen to live on the fringes of society and who reject all of the constraints of what they call “the system”.

The Photographer and Reporter Grant (€15,000) was won by Eric Baudelaire, 30, for his project, “Photographing the Eastern borders, from Turkey to the steps of the Caucasus and the Middle East” – a report on the likely boundaries of tomorrow’s Europe.

The Producer Grant (€50,000) was presented to Gaëlle Jones for her project “Depopulation”, a feature film directed by S. Louis. It depicts a world devoid of future in which ordinary people, faced with the imminence of their death, struggle in order not to be completely swallowed up by despair.

The TV Screenwriter Grant (€12,000) was given to Gioacchino Campanella, 30, for his comedy project about a successful 40-year-old writer who attempts to avenge himself for his wife’s infidelity by disguising himself in order to meet, seduce and humiliate her. Of course, he gets caught in his own trap.

The Digital Creations Grant (€25,000) was awarded to Sylvain Hourany, 25, for his project “Sonoise“, a free artistic site devoted to noise.

The Musician Grant (€25,000) was presented to Jean-Baptiste Robin, 27, to enable him to record the complete works for organ composed by Felix Mendelssohn in the 19th century.