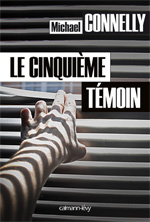 The book
After her husband walks out, Lisa Trammel suddenly doesn’t have enough money to pay the mortgage, and the Westland National Bank is threatening to repossess her home. In a panic, she hires lawyer Mickey Haller to defend her. At the same time, her outraged protests against her bank’s subprime foreclosures become so frequent and violent that she is served with a restraining order and barred from access.

Unfortunately for her – and for Haller, who hoped to gain some time by dragging out the case – the plot thickens when Trammel is suddenly accused of murdering Mitchell Bondurant, a Westland executive who was found dead in the bank’s parking lot.

As he begins to mount a risky defence, Haller uncovers some facts that make him doubt not only his client, but also himself, right up to the verdict.

In addition to being a particularly brilliant trial story – Michael Connelly knows the criminal code and the strengths and weaknesses of the American legal system inside out – The Fifth Witness is also an insightful analysis of the subprime crisis, whose shock waves are still being felt around the world. As Marilyn Stasio wrote in The New York Times, “Connelly is himself a master manipulator, and there’s always something deadly serious behind his entertaining courtroom high-jinks.”

The author
With more than 45 million books sold and translations into 39 languages, Michael Connelly is one of the most widely read authors in the world. His works include The Reversal, Void Moon, Angels Flight, and A Darkness More Than Night. Connelly lives in Florida with his wife and daughter.

To celebrate the release of The Fifth Witness, Le Livre de Poche is publishing The Reversal.

The large-format edition published in May 2012 by Calmann-Lévy was ranked 27th on the list of bestselling detective novels last year (and 6th among large-format releases only).*

The Reversal
The book
After 24 years in prison for the murder of a young girl, convicted killer Jason Jessup has been exonerated by new DNA evidence and released. Longtime defense attorney Mickey Haller is recruited by the LA county prosecutor to change his stripes and prosecute. Taking second chair will be Haller’s ex-wife, the formidable Maggie, with Haller’s half-brother Harry Bosch serving as special investigator. This trio must gather enough evidence and witnesses to prove Jessup guilty once and for all and put him behind bars for a long time.
“In The Reversal, the dynamic duo of Haller and Bosch brilliantly weaves the cerebral subtleties of a legal thriller into the visceral blows of a hardcore detective novel, providing plenty of exciting twists and keeping readers on the edge of their seat until the very end. A master of the genre is back in full form.” Philippe Blanchet, Le Figaro Magazine