The Elle Foundation: Winner of the 2012 Corporate Philanthropy Award 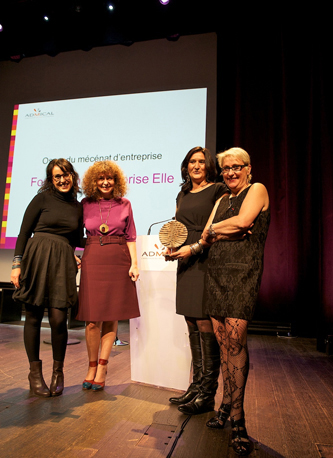 By a unanimous vote of the jury chaired by Mercedes Erra1 and Jean Michel Ribes2, Admical3 in partnership with the Fondation de France, awarded the Corporate Philanthropy Award to the Elle Foundation, which is dedicated to women’s education worldwide. This Grand Prize of the 2012 Awards was presented during an official ceremony on 13 November 2012 at the François Mitterand National Library in Paris.

Valérie Toranian, editor-in-chief of Elle magazine and foundation chairperson, thanked Admical for this distinction, adding, “We always have a good reason to get involved.” Referring to the tragic story of Malala, the 14-year-old Pakistani girl who was shot for advocating girls’ education on her blog, she said, “We were all very upset by this crime. If the Elle Foundation hadn’t already existed, it would probably have been created the day after this tragedy.”

“This award is a real honour, but also and especially a way to encourage women everywhere to continue the struggle – women who, let’s not forget, represent more than half the sky,” noted Karine Guldemann, the foundation’s executive director.

The Elle Foundation in 2012

Since its inception, the Elle Foundation has supported some 50 projects in France and more than 20 other countries. Certain projects, such as Roz magazine4 in Afghanistan and Solidarity Mode5 in France, particularly reflect its objectives.

The Elle Foundation also serves as a “line producer” on a project, bringing together as many stakeholders as possible and encouraging networking among companies that are sometimes located at quite a distance from each other, including Microsoft, Vinci, Air France and Véolia. At the initiative of the Elle Foundation, these companies and foundations come together on the basis of the same humanitarian values.

Lastly, the Elle Foundation has laid the groundwork for a global public-service commitment by Lagarère Active through the creation of a Social Solidarity department involving all titles and brands and in line with the foundation’s principles.

1 Founder of BETC and executive president of Euro RSCG Worldwide
2 Author, director and head of the Théâtre du Rond-Point in Paris
3 Founded in 1979 to promote corporate philanthropy, Admical Carrefour du Mécénat d’Enterprise has been a legally recognized non-profit organization since 1992.
4 Roz, a monthly women’s magazine published by the Afghanistan Libre association and supported by Elle and its foundation since its creation.
5 A national competition for young women from low-income backgrounds; the Elle Foundation awards winners a full scholarship to a fashion school.

Admical and the Corporate Philanthropy Awards
Admical is a legally recognized non-profit organization that has been fostering corporate philanthropy in France since 1979. It serves as a representative of philanthropic bodies before the public authorities, media and international organizations.

The Admical Awards, which shine a major spotlight on philanthropy, recognize both large and small companies for exemplary philanthropic policies in all areas of public service. With these awards, Admical seeks to encourage heads of companies to engage in public service and to set standards of commitment based on the Corporate Philanthropy Charter's ethical principles.

Acting independently of Admical, the juries are made up of prestigious figures in business, the media, higher education, communications and various public-service fields. This year, Mercedes Erra, founder of BETC and executive president of Euro RSCG Worldwide, and Jean-Michel Ribes, author, director and head of the Théâtre du Rond-Point, chaired the awards jury.

In partnership with the Fondation de France