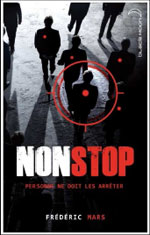 Since the end of the Cold War, the Americans have not really had a truly identifiable enemy. For a while, 9/11 crystallized American fears about Al Qaeda, but today the real threat lies elsewhere.

Who might want to push Uncle Sam into a new, faceless war, and why? Isn’t its loss of influence in the Middle East already complete?
Conspiracy theorists, Israeli spies, Hezbollah fanatics and Iranian Revolutionary Guards:
Frédéric Mars explores these possibilities and more for the reader to unravel as the book’s electrifying plot unfolds.

More than a disaster scenario, NON STOP is mainly an extremely realistic, suspenseful thriller reminiscent of the TV show 24, set against the global terrorist threat.

A THRILLER BY FREDERIC MARS

The United States is the victim of the largest terrorist strike since 9/11, an attack without any claims of responsibility and, it first seems, without explosive devices – until the most frightening truth is revealed: the victims themselves are the murderers. Booby-trapped without knowing it, transformed into human bombs, they blow up as soon as they stop walking. Why them? Who transformed them into instruments of death? And how can they be defused?

9 September 2012, Manhattan: an ordinary man receives an anonymous manila envelope and begins walking to the subway. He blows up just after stepping on the subway platform, sowing death all around him. Similar explosions immediately spread like wildfire.
Sam Pollack and Liz McGeary, the two detectives assigned to the case, quickly realize that they’re facing a terrorist attack of unprecedented proportions, an unclaimed attack that’s particularly hard to fight since it transforms innocent people, regardless of gender, age or race, into human bombs – instruments of an apocalyptic scenario. All had been fitted with booby-trapped pacemakers over the past two years. All receive manila envelopes and start walking, and then trigger the explosive charge wherever they stop. The endless trek for those called the “Death Walkers” has just begun. 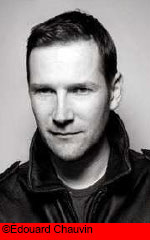 Mars, who’s just over 40, has published 40 books in a wide variety of genres, including six novels. Some of his books have been translated into several languages. His last book, Le Livre du mal: Le Sang du Christ (The Book of Evil: The Blood of Christ), a historical thriller in the vein of The Da Vinci Code, will be released in paperback on 19 October by J’ai lu.
The idea for NON STOP came to Mars during a trip to New York on 4 November 2008, the evening Barack Obama was elected, while he was visiting Ground Zero. George Bush Sr. served as president during the Gulf War, Bill Clinton during the radicalization of the Israeli-Palestinian conflict and George W. Bush during the high drama of 9/11. What disaster awaited President Obama – whose name was synonymous with hope for an entire people, even for all humanity – during his term in office? Mars found his answer in a brief item in the British press a few weeks later. A mere two or three paragraphs described the way in which MI5, the British counter-espionage agency, had thwarted an unprecedented attack: a woman whose breast implants were filled with PETN, an extremely powerful liquid explosive, had been stopped before perpetrating her crime. Such attempts would now be the new threat: an unsuspected enemy who is almost invisible, who is so familiar and close to us that no one would expect him or her to strike.