A new version of the Internet site of France’s top cable and satellite music channel, MCM

, is up and running at www.mcm.net. It offers more music news, programmes, events, audio/video content and games – in short, a more interactive relationship with its viewers! 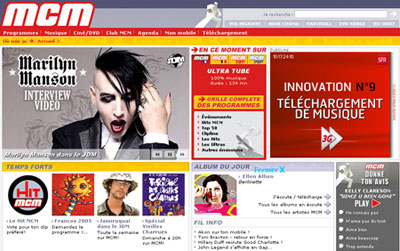 The idea behind the new site is to offer MCM viewers an extension of the channel. Cybernauts visiting the site can check out the programme schedule – a player runs the MCM, MCM TOP and MCM POP channels’ schedules in real time, right on the home page. Find out about channel events in advance, influence programmes, find additional content related to the channel’s top programmes (via Top 50®, JDM, Clipline and more) and even do in-depth research on subjects covered by the channel.

MCM is taking advantage of the complementary nature of the various media by enhancing its site with 10 video excerpts per day. TV viewers-cybernauts can consult, at their leisure, all the videos of artists promoted on the playlist or shown during specific-genre time slots, such as Ultra Club, Ultra Métal, Ultra Hip-hop, Ultra R&B and so on.

The MCM site has made information a priority from day one. News is a key focus of the channel and an extension of its programming, and high-quality content is featured. Daily feeds include:

Hit MCM, the channel’s signature show, was designed to provide viewers with a chance to program their favourite videos free of charge. Each week, a list of 50 videos is uploaded onto the MCM site, and viewers-cybernauts vote for their top choices. The channel airs a show based on the voting results the following Saturday at 2:30 p.m.

The success of the interactive module spurred MCM’s decision to revamp the site, to improve voting mechanics and ergonomics and better meet the expectations of MCM viewers.

Each week, the channel’s website members can enter a slew of free game contests. Right now, for example, the site is giving away portable phones, DVDs, VIP passes to the Eurockéennes festival, and movie theatre and concert tickets. Clearly, registering as a member of the MCM website optimizes your chances of grabbing some of the best entertainment opportunities! The site will soon add blogs and forums to increase its interactivity with the TV audience. 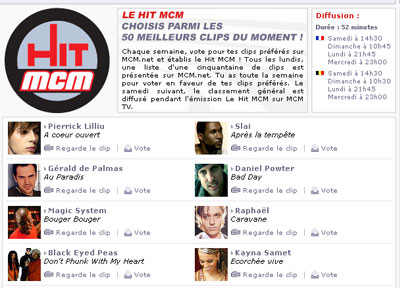 In order to offer its visitors and members the best possible services, the MCM channel’s website has teamed up with the biggest Internet partners in France: