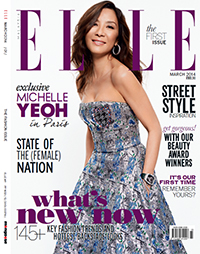 Lagardère Active is continuing to expand its network worldwide with a new Malaysian edition.

ELLE Malaysia will boost the international presence of the ELLE network, which is already a leader on the global high-end women’s magazine market. The launch has also proven a huge advertising success: the March 2014 debut issue has 308 pages, including 74 pages of advertising, in line with targeted objectives.

The monthly ELLE Malaysia, published under license (Lagardère Active holds the rights to the ELLE brand) by Mongoose Publishing, will hit newsstands on 21 February 2014.

For this launch, ELLE Malaysia is positioning itself from the start as a multimedia, multiple-platform brand, since the new edition will include a website (www.elle.my), an app (IOS and Android) and a presence on social media (Facebook, Twitter and Instagram) prior to the magazine’s release.

Says Constance Benqué, managing director for high-end women’s titles at Lagardère Active: “With this 45th edition, in Asia, we are actively continuing our international expansion of the ELLE network. This new launch is an opportunity to celebrate the strength of the ELLE brand: the premier high-end women’s print-media brand in the world, with a presence across all media platforms.”

According to François Coruzzi, international executive director of Lagardère Active: “We are extremely proud to be launching this new edition of ELLE on the Malaysian market, and we welcome this partnership with Mongoose Publishing, which has an especially strong track record in the high-end market. This new edition of ELLE will benefit from the power of our global network as a foundation for its success.”

Says Graham Paling, CEO of Mongoose Publishing: “We are delighted to be bringing ELLE to Malaysia. ELLE is the world’s preeminent high-end women’s magazine, and its presence on the Malaysian market will take women’s magazine publishing to a new level in the country. We look forward to making it a trendsetter and giving our readers a magazine that treats them with respect and matches their aspirations. All our titles are leaders in their field and we look forward to making ELLE Malaysia the very best women’s fashion magazine in the country.”