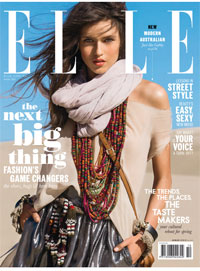 Lagardère Active is excited to be continuing the international expansion of its ELLE network with the launch of a new edition: ELLE AUSTRALIA.

The international network of ELLE magazines now extends to 44 editions on five continents.

ELLE Australia will boost the worldwide presence of the ELLE network, a leader in the global market for high-end women’s magazines. The launch has already proven a major advertising success: the debut issue for October 2013 has 406 pages, including 159 pages of advertising – more than twice the goal initially targeted.

Making its debut on 23 September 2013, the monthly ELLE Australia is being published under licence (Lagardère Active is the owner of the ELLE brand) by Hearst Bauer Media, a joint venture between Australian publisher Bauer Media and US publisher Hearst Magazines International.

For this launch, ELLE Australia is positioning itself from the start as a multimedia, multiple-platform brand: for the first time, a new edition of ELLE will appear on the Internet (www.elle.com.au) and have a presence on social media (Facebook, Twitter and Instagram) before the magazine’s initial publication.

Says François Coruzzi, executive vice president for international publishing at Lagardère Active: “We’re pleased to be forging this partnership with Bauer Media, the leader in Australia’s magazine market, and Hearst, our partner in 17 countries. We’re extremely proud to be launching this 44th edition of ELLE on the Australian market. Australia is a fast-growing market that’s especially dynamic in the fashion and beauty sectors. This new edition of ELLE will draw on the full strength of our international network to ensure its success.”

Matt Stanton, CEO of Bauer Media, says: “ELLE is a truly contemporary magazine that’s ideally suited to its readers and advertisers. As a women’s magazine that covers fashion, beauty, lifestyles and well-being, ELLE addresses women in a unique way to inspire, motivate and entertain. With its rich, varied content, it’s accessible to both local and international audiences. In addition to the print version, the ELLE brand will be available on multiple new platforms, including a website, tablet and mobile apps, and even events.

Adds Duncan Edwards, president and CEO of Hearst Magazines International: “The Australian launch of ELLE brings together two of our most important partners: Bauer Media (formerly ACP) in Australia and Lagardère Active worldwide. Hearst publishes ELLE in 17 countries, and we’re delighted to be adding Australia to that list. Our local team is the best in the market and will be offering a fantastic edition of ELLE to its Australian readers and advertisers.”

About Hearst Magazines International
Hearst Magazines International, a division of the Hearst Corporation, is the largest US publisher of magazines worldwide. HMI publishes 290 titles and 147 websites translated into 34 languages in 81 countries. The biggest titles published by the Group are Cosmopolitan and ELLE, two leading brands with more international editions than any other magazines, as well as ELLE Decor, Esquire, Good Housekeeping, Harper's Bazaar, Popular Mechanics and Seventeen. In addition, HMI publishes several magazines through joint ventures, including Men's Health and Runner's World in the UK and The Robb Report in Russia and China. HMI has wholly-owned subsidiaries in China, Italy, Japan, Spain, Taiwan, the Netherlands and the UK. Hearst Magazines also publishes 20 titles in the US.

About Lagardère Active
Lagardère Active is one of Lagardère SCA's four corporate branches, together with Lagardère Publishing (books), Lagardère Services (press distribution and services) and Lagardère Unlimited (rights management, image marketing and talent representation for athletes and artists, in France and internationally).

The leading French magazine publisher, Lagardère Active owns the ELLE brand and its associated products, and licenses them in partnership with Hearst Magazines in 17 countries (18 editions of ELLE and nine of ELLE Decor) and with Burda, Aller, Sanoma, Ringier and 14 other partners in 25 countries.

Lagardère Global Advertising, Lagardère Active's international advertising brokerage, will handle the marketing of this new magazine outside Australia, as it already does for all titles in the ELLE and ELLE Decor networks worldwide.