HDS Retail Asia Pacific gains a retail presence in mainland China with the opening of 9 stores in Shanghai’s Hongqiao Airport. 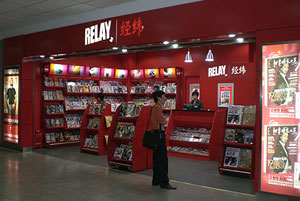 The stores, 8 Relay and 1 Virgin and totalling approximately 480sqm of retail space are located throughout the airport in both the domestic and international terminals; and within the airside, landside and arrivals areas.

One of two major airports in Shanghai, Hongqiao caters to over 23m PAX annually and has seen significant expansion to its facilities in recent times.

The commencement of operations in mainland China follows closely on the heels of our recent opening of 5 Relay stores in Taiwan and combined with the already established network of 13 stores in Hong Kong Airport gives us a strong platform for growth in the region.

Numerous challenges were faced by the small, dedicated local team, lead by Séverine Lanthier, in gaining entry to the China market including the very specific legal requirements for a foreign entity, and the need to create low CAPEX base retail fit outs. The latter was a vital step in creating a sustainable business model given the highly competitive rental environment within China.

In finding a solution for the successful delivery of quality retail fit outs below the target EURO 450 per sqm mark the team worked with French design/construction firm MBA to create an outcome that involved custom manufactured fixtures from Taiwan as well as local joinery and installation. The result – 9 stores delivered on time, on budget and to a standard that belies the relatively low financial investment involved.

With the initial demands of starting up operations under their belts the hardworking China team now faces the ongoing development of both the Hongqiao operation as well as sourcing additional opportunities for expansion within the region.