Lagardère Services Asia Pacific’s local entity, Saresco Travellers, and Billabong have partnered to open the world’s first Billabong airport store. They were the successful tenderer for the Mid-Price Brand Name Concession at Changi Airport. Opening in May 2009, the 92sqm store will be located in Terminal 3. 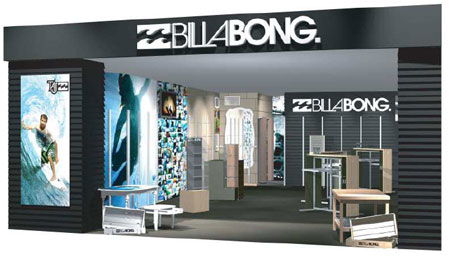 As a leading travel retail specialist, Lagardère Services Asia Pacific are always expanding their concept portfolio and are excited to join with the iconic surf brand. Scott Raisin, CEO, said, “We are honoured to be the first to represent Billabong in travel retail. As one of the world’s leading lifestyle brands with a tradition in providing quality, functional surfwear that appeals to the young and the young-at-heart it will be an exciting addition to the mix at Changi Terminal 3.”

Jason Neely, Billabong’s Retailer Operations Manager, said the store represented an exciting new phase in the development of the Billabong brand in the Asia Pacific.

“Billabong is focused on building its presence in the Asian region and the opening in Singapore of the world’s first Billabong airport store illustrates the brand’s commitment to the region,” said Mr Neely.
“This is a significant move for Billabong so it is comforting to be partnering with Lagardère Services Asia Pacific, one of the world’s best airport retail operators. We feel the combination of a world leading retailer and a world leading brand will add an exciting new dimension to the Changi Airport retail mix.” he added.

About Billabong:
Billabong was founded on Australia’s Gold Coast in 1973 by surfer and surfboard shaper Gordon Merchant. By the 1980s the brand had established its place in Australian surf culture and was ready for international expansion, first in Asia/Pacific and, by the end of the decade, in Europe. Billabong was well placed to capitalise on the explosion of surf culture in the 1990s and the brand’s exponential growth culminated in an IPO on the Australian Stock Exchange in 2000. Today the company is the world’s leading “Youth Lifestyle Brand” and owns 12 of the world’s leading boardsport
brands that complement the core Billabong range. We currently have over 250 stores in major cities throughout the world and our products are now sold in more than 10,000 outlets in more than 100 countries across the world.