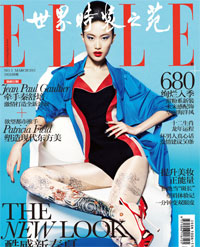 Lagardère Active is proud to announce that its international edition, ELLE CHINA, will become semi-monthly as of February 5, 2012, with publication on 5th and 20th of each month.

The first international fashion magazine to launch in China in 1988, ELLE CHINA has a unique and upscale editorial positioning that resonates with readers in the region.
Since 2009, ELLE has always been the Chinese market leader both in circulation and advertising. This move to publishing semi-monthly reflects ELLE China’s insight of the rapidly evolving market as well as its desire to fulfill local consumer needs.

With a new editorial formula, each issue will now average between 280 and 400 pages and will be priced half of the previous price for monthly ELLE.

To celebrate this launch, ELLE China will organize a special China Fashion Night in Paris on March 6, during Paris Fashion Week.

Today, ELLE is the world leader in the upscale women’s magazines segment with:

ELLE CHINA is published under licence by Hearst Magazines China.

Bruno Lesouëf, CEO of the French and International Magazine Publishing division of Lagardère Active said: “We are very enthusiastic by this first edition of ELLE to be published twice a month. We are also happy that this initiative takes place in China, in partnership with Hearst Magazines International. This is a fantastic opportunity for our brand.“
Duncan Edwards, President and CEO of Hearst Magazines International: “ELLE China has had much success with both readers and advertisers and we are pleased to be increasing its publishing schedule to twice a month.”

About Lagardère Active
Lagardère Active is one of Lagardère SCA's four corporate branches, together with Lagardère Publishing (books), Lagardère Services (press distribution and services) and Lagardère Unlimited (marketing and management of sports broadcast rights, talent representation for athletes and artists).
Creator of multimedia content, Lagardère Active has leading positions in the businesses it operates, including magazines publishing, audio-visual (radio, TV and TV production), digital (pure players sites, mobile applications and tablet applications) and advertising. Lagardère Active, the number one of French Magazine Publisher and owner of the ELLE brand and its derivatives, licenses them: