HFM takes control of ELLE and ELLE DECOR in Italy

The Hachette Filipacchi Médias group will purchase the 50% share in the company EDIF that is currently held by the RCS Periodici group. EDIF publishes the magazines Elle and Elle Decor in Italy. As a result of this transaction, Hachette Filipacchi will control the entirety of EDIF’s capital, and will appoint Mr. Bernard Mellano, CEO of Hachette Rusconi, as president of EDIF. 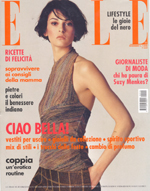 ELLE was introduced in Italy in 1987 and has become the top high-profile women’s periodical in the market. ELLE DECOR is up among the leaders in high-profile decorating magazines.

International advertising sales for the two magazines will remain under the direction of Interdeco Global Advertising, a subsidiary of Hachette Filipacchi Médias.