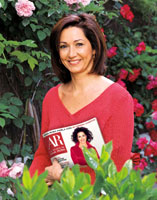 On 26 October Hachette Filipacchi Médias will launch a women’s magazine entitled “A.R.”. The monthly will be published in collaboration with the reporter Ana Rosa Quintana

, a celebrity host for the television programme “Sabor a ti”.

The magazine managed by Ana Rosa will be a “practical, feelings-oriented, upbeat publication, featuring varied content and a contemporary style”. It will be designed for the 5.7 million women between the ages of 30 and ?9, who do not presently have a magazine that addresses their interests and questions. A.R. will feature both practical topics dealing with the everyday concerns of its readers and in-depth reporting, and will communicate with them on a personal, even intimate level.

Ana Rosa, a “role model” for women:
“I will write the editorial, conduct an interview for each issue and make sure that all of the content is very upbeat“. But above and beyond what she has to say, Ana Rosa brings something essential to the magazine: her personality.

According to Juan Caño, editorial vice-president for Hachette Filipacchi Medias in Spain, “Ana Rosa personifies the spirit of a generation of women: she has worked, she married and then divorced, she has a child she is raising as a single parent and she fell in love again… She is a gifted communicator, who has become a role model for many women“.

The success of “opinion leader” magazines: The phenomenon of women’s magazines built around “opinion leaders” got its start in the United States in 1991, with the launch of Martha Stewart Living, a lifestyle monthly based on a television programme. Its sales currently exceed two million copies.

The trend culminated in 2000 with the introduction of “The Oprah Magazine”, published by TV host Oprah Winfrey. is considered the decade’s greatest success, having achieved a circulation of 2.1 million copies in the first six months after its launch. Since then the trend has spread to other countries.

2 new publications this month in Spain!

In addition to the magazine A.R., Hachette Filipacchi Médias is launching a new popular history magazine christened “Clio”, slated to go on sale at newsstands 19 October.

HFM’s subsidiary in Spain is the leading publisher of magazines in the market, both in terms of the number of copies sold and advertising sales. The company currently publishes 22 magazines and sells a total of 62 million copies a year, serving a total readership of nearly 8 million (EGM 2º A.M. 2001). Some of the magazines published by the group in Spain include ELLE, Diez Minutos, Quo, Fotogramas, Teleprograma, Emprendedores, Que Me Dices, Ragazza, Car & Driver, and others.