The first entertainment magazine for men, coming to newsstands on March 30 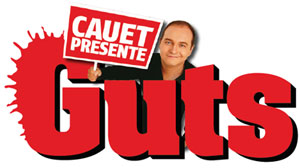 SEXY, YOUTHFUL and INTERACTIVE, GUTS is published jointly by the staffs of Gérard Ponson and Cauet.

Offbeat, upbeat and fun in the Cauet way, “the magazine for people who dare” targets a young, male audience.

Each issue begins with an interview by Cauet in his inimitable style! People, sports – whatever the subject, it will pass “between his hands”. And it’s certainly no accident that he decided to start with Victoria Silvstedt and Carmen Electra!

The interview will be followed by sections devoted to the out-of-the-ordinary (like the weird artist, the anonymous person with the bizarre hobby and all the planet’s raving lunatics), cars (unusual models, tune-ups, competition cars, etc.) and shopping (high-tech, traditional, unusual and other items).

And obviously a rather sexy section, which should surprise no one! The magazine will also take a fresh approach to behind-the-scenes news coverage and offer some decidedly offbeat articles. The 124 fun-packed pages will close with two weeks of TV programming.

by offering challenges to readers, who can communicate by MMS or on its website at www.guts.fr. A brand spin-off, the website will feature similar content – sexy and youthful (blogs, videos, etc.). The colourful magazine will have an unstructured layout that takes a quick-and-easy “snacking” approach to reading. Faithful to the causes championed by Cauet and Gérard Ponson, GUTS will be involved in road safety, AIDS prevention and other campaigns. For example, partnerships will be set up to distribute condoms this summer.

On newsstands every other Thursday, GUTS will be sold for €2.90.


With a print run of 450,000, the magazine is aiming for an average paid circulation of 300,000 in 2006 and will be distributed by NMPPs (newspaper and magazine distributors).

The magazine’s launch is being supported by a major promotional campaign costing €5 million. The campaign will get underway on 28 March and will feature three short, simple and humorous TV ads (8, 12 and 20 seconds, respectively) as well as poster advertising, particularly at points of sale.

Cauet “I have always had a passion for the media. Now, thanks to GUTS, I have the opportunity to take on the great adventure of the print press”.