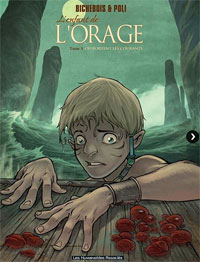 “We currently have 200,000 people signed up on our platform, who are already users of downloaded magazines. Further to the launch of a Pilot Book section last month, we are increasing the speed of our growth by signing an agreement with LES HUMANOIDES ASSOCIES. Fifty comics are now available for downloading on our platform, and we are currently innovating by launching volume 3 of L’Enfant de l’Orage, available exclusively in digital format until its paper release on January 21st 2009”, explain Aymeric Bauguin and Sébastien Bégel, co-founders of the HDS Digital kiosk.

“We were attracted by HDS DIGITAL’s expertise in its unique approach as consumer of digital editorial products, particularly for Netbooks. The launch of a new volume of the successful series by Bichebois and Poli, L’Enfant de l’Orage, available exclusively before its Paper release, testifies to our determination to consider the digital format as a significant development strategy in the distribution of our content, which is complementary to the work done with booksellers“, adds Fabrice Giger, Humanoïdes Associés manager.

Relay.com is a magazine and book downloading platform operated by HDS Digital. The platform is also available as a white label service with major French e-commerce players such as 3Suisses.fr, RueDuCommerce.fr, Alapage.com and VirginMega.fr.

LES HUMANOIDES ASSOCIES, French publisher of comic books, known around the world for having published mythical series such as “L’Incal” and the magazine Métal Hurlant, will celebrate its 35 years of existence in 2009.