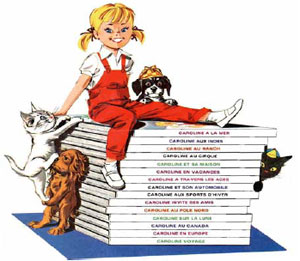 With her blond hair in pigtails and wearing red dungarees, Caroline has enchanted budding readers across the world for generations – so much so, in fact, that her books have been translated into 15 languages. Despite her age, her sense of fun is still intact, and she’s just as cute as ever!

Throughout the 44 Caroline volumes published by Hachette since 1953 (with 38 million copies sold), the loveable character created by Pierre Probst leads her merry band of four-legged friends – dogs Bobi, Youpi and Pipo, cats Pouf and Noiraud, Boum the bear cub, Kid the lion cub and Pitou the panther – on wild adventures. Taking a cheerful, optimistic approach to each new challenge, she has crossed the ages and the generations – first in ballet shoes, then in sneakers – without developing a single wrinkle! Born a modern little girl, she remains fresh in the 21st century.

And as Caroline enters her 60th year, her father, Pierre Probst, would have been marking his 100th!

To celebrate the birthday of this wonderful children’s character, Hachette Jeunesse has organized some exciting surprises, including a limited-edition reprint of the first-ever volume from 1953, Une fête chez Caroline, in its original large format, and has launched a new series called Petits Albums Hachette comprising 12 volumes about Caroline and her friends in a modernized-yet-vintage format.

And to ensure that this is a birthday to remember, Hachette has put together a tribute book in which generations of famous readers recall their fond memories of the Caroline volumes (to be explored in the appendix).

What a great way to wish Caroline a long and happy life!

To celebrate her 60th birthday, Pierre Probst’s famous children’s character, Caroline – who, despite her years, is as modern (and wrinkle-free) as ever – has launched her own Facebook page!