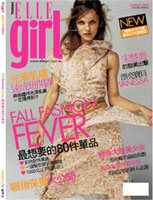 The seventh edition of Elle Girl was launched on 29 August 2003 in Taiwan by Hachette Filipacchi Taiwan Inc., a wholly owned subsidiary of HFM, which has been publishing Elle in this region since 1991.

The first edition of Elle Girl was launched in August 2001 in the United States. Since then, the brand has been successfully introduced in the United Kingdom, the Netherlands, Russia, Canada (in Quebec), and South Korea.

The first issue of Elle Girl Taiwan has 188 pages, including 55 pages of advertising. This monthly magazine has a 210 X 285 mm format, which is optimal for the Taiwanese market, and a print run of 120,000 copies. The editor-in-chief is Doris Lee, under the editorial supervision of Cindy Hsu, who also manages Elle Taiwan.

Elle Girl Taiwan targets teenagers, an audience with ever-increasing disposable income, and is based on the same concept as the magazine’s other editions: a focus on fashion and beauty with an emphasis on conveying Elle’s values while keeping its finger on the pulse of its teen readership. The first issue, which features French singer Vanessa Paradis on the cover, highlights fall fashion trends and offers its readers a special pullout supplement on jeans.