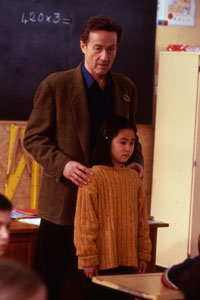 Monday, 19 November at 8:40 p.m.: ADOS: Le Débat
(exceptionally broadcast on the 19th instead of on the first Monday of the month)

Anne Gintzburger leads a discussion with teenagers and adults committed to the fight for the protection of children, centred around “Ting Ting“, an episode of the television series L’Instit (The Teach’), dealing with a disadvantaged child.

A series of four documentaries – four true stories that accurately portray the daily lives of millions of children throughout the world. 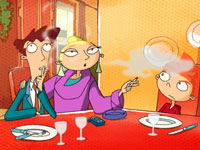 Célestin is a clever ghost who watches over his friend Lucas and his pals, protecting them against the hazards of daily life.

His mission is to deliver serious prevention messages to children with a touch of whimsy.

In each of the five episodes of this famed animated series broadcast this week, Célestin emphasizes to Lucas, Thomas and Emma that children are people who deserve respect, consideration, attention and protection, but above all that there are no “little rights”, and that it cannot be said often enough that all children must be fed and cared for, have a chance to go to school and the right to understanding, regardless of their status. (Produced by France 3/ Julianne Films), 6 x 5’

Monday through Friday at 8:35 p.m.: five special productions of Gullimag, the daily newsmagazine devoted to culture, the bizarre and the world of children.
And throughout the week between programmes:

Also worthy of note is the release on 19 November of Gullia’s album Le Coeur Voyageur (Sony BMG) and the video clip of her second single “Tourne, tourne”, devoted to the protection of the planet. This message is closely related to children’s rights since it is crucial for children to inherit a healthy planet on which they can live in good health and safety.