For the second year running, Gulli is organizing a major gathering
on Thursday 22 April 2010, at 10 am on the Prairie du Triangle de la Villette
in Parisin the presence of Pascal Obispo
1 person present = 1 tree planted 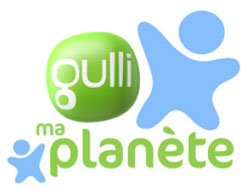 To coincide with the 40th World Earth Day on Thursday 22 April, for the second year running Gulli is organizing a major gathering starting at 10 am on the Prairie du Triangle de la Villette. This event, in which everyone is invited to take part, is designed to motivate children and raise their awareness of environmental issues, along with their families.

Pascal Obispo, who supported this major event in 2009, was keen to repeat the experience this year.

Gulli has also produced a programme about the environment, “Vues d’ici” (“The view from here”), supported by Pascal Obispo, which has been broadcast on the channel since 8 March. The aim of the programme is for children to plant a “Captain Samouraï Flower” flag, a nature-loving character created by Pascal Obispo to protect the areas that children love in the most beautiful regions of France. This symbol is designed to offer hope to the younger generation, the doers of today and the decision-makers of tomorrow.
Created in 1970 to encourage students to set up projects that help raise awareness of the environment, World Earth Day can now involve everyone. It is celebrated across the world by more than 500 million people in 184 countries.To support this global initiative, Gulli has created a fun and festive event that invites children and their families to gather in Paris, from 10 am on the Prairie du Triangle de la Villette and form an enormous human tree.

Last year, Gulli succeeded in attracting 5,000 people to the Dune du Pilat to create a wonderful human tree. Following the success of the first event, Gulli has decided to repeat the experience, in partnership with the NGO Planète Urgence, by inviting the whole family to join the channel’s presenters, Philippe Risoli (L’Ecole des fans) and Joan Faggianelli (In ze boite) on 22 April.

This symbolic gathering, which also promises to be a lot of fun, will give children and adults alike the chance to make a practical contribution to reforestation. Gulli promises, with the help of Planète Urgence, to plant a tree for each person present in the “Gulli children’s forest” in Indonesia.

In 2009, alongside Anggun, a famous Indonesian singer, 20,000 trees were planted as part of a large-scale forest and mangrove reforestation operation. And thanks to the Pilat event, trees will soon be replanted in the south west of France.
The Gulli children’s forest in 2009 in 2010

Gulli – a civic-minded channel committed to protecting the environment

According to Emmanuelle Guilbart, Director of Television Operations, France and Worldwide at Lagardère Active: “Thanks to this fun, civic-minded event, Gulli aims to remind children and their parents that protecting the environment is a challenge that we can meet together, while having fun during an unforgettable day out for the whole family.”

On 22 April, the event will also be broadcast on Gulli, with a special line-up throughout the day:

Gulli is the first free children's channel that's also targeted at parents. Ranked among the top three DTT channels (Médiamat May 2010), Gulli has conquered audiences thanks to the quality and diversity of its programming (movies, animated series, fictional shows, documentaries, entertainment shows, factual shows, etc.), its wealth of programming initiatives and its openness to the world displayed on both the channel and its Web site, gulli.fr. Gulli is broadcast to French homes via free DTT, satellite, cable and ADSL.

Planète Urgence is an association created in 2000 and a recognized charity that is developing an original, socially responsible way of enabling each member of the community to have a practical effect on the environment by taking part in projects created and managed by local people. The "Environment and Development" programme, set up in 2006, is part of the "Billion Trees" campaign launched by 2004 Nobel Peace Prize winner Wangari Maathaï, and is supported by the United Nations Environment Programme (UNEP). The three countries in which the programme is active are Indonesia, Mali and Madagascar. Trees have a dual value - ecological and economic. They contribute to the development of local communities and help them adapt to climate change. Reforestation and energy efficiency projects help protect and restore their living environment, and promote its social and economic value.