ELLE will see a change on 28 February… 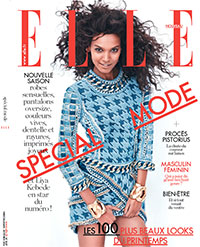 ELLE magazine is reasserting its identity and boosting its image.

A stronger editorial voice, more opinionated content, a clearer stylistic identity, a sharper look at society and a host of new writers…
ELLE is stepping up its commitment and leadership on behalf of women, with all-new energy and excitement.

ELLE Magazine: an object of desire that you’ll want to read… and reread, thanks to:

A surprising cover each week, featuring a strong image and a fresh topic.

Says Valérie Toranian, editorial director and brand manager for the ELLE brand:
“ELLE has constantly renewed itself by taking its graphic and esthetic cues from the changing world around it. But it has never lost sight of its founding principles:
Energy, optimism, excitement, a strong point of view – and the inexhaustible curiosity of its editorial staff. The strength of ELLE magazine lies in its very human concerns. Subjectivity, writing, commitment, passion and a bit of a mad streak, all to be found in personnel that are unafraid to tackle the challenges of our time. You say the world is changing? All the better – we’re changing, too.”

Says Constance Benqué, managing director for high-end women’s titles:
“The ELLE brand is continually reinventing its various forms of expression, but always faithful to its DNA. Now the magazine is changing once again so as to always stay ahead of the game as an object of desire for its readers. The new ELLE will showcase its brands to even better advantage.”

The magazine : The leading high-end women’s weekly, with over 2 million readers* and paid weekly circulation in France of 369,965 copies.**.