ELLE Supports Japan, the ELLE brand is mobilized for Japan 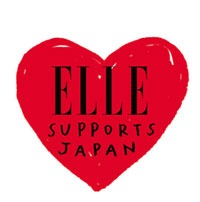 Since its creation in 1945, ELLE is an engaged and active brand. In an act of solidarity, the ELLE international network, in ongoing and direct collaboration with the Japanese ELLE team, has launched the “ELLE Supports Japan” initiative.

Thanks to the power of ELLE’s global network, the operation “ELLE Supports Japan” was featured in the pages of ELLE magazine in 25 countries* (totaling 75 editorial pages) and across 24 ELLE websites throughout the world.

In addition, ELLE’s web visitors across 24 countries were also able to discover the daily lives of the team working at ELLE Japan’s website, who, in the weeks following the devastating events, shared their personal stories and photos on a daily basis. All “ELLE Supports Japan’ content was published on ELLE Japan’s website in both Japanese and in English (www.elle.co.jp/feature/action_en/top).
A central element of this solidarity campaign, initiated by Valérie Toranian, Editor-in-Chief of ELLE France and ELLE’s International Brand Manager, is the creation of special edition T-shirts designed by Paul Smith, Vanessa Bruno, and Jean-Paul Gaultier featuring the “Elle Supports Japan” logo. From April 22nd, 40,000 of these T-shirts will be sold starting exclusively through the Relay newsstands across France, as a supplement with the ELLE magazine, for 4.90 Euros. All the profits ELLE received from the sale of these special edition T-shirts will be the donated to the Japanese Red Cross.
The “ELLE Supports Japan” T-shirt operation will also be implemented in 8 other countries (Japan, Germany, China, Denmark, Hong Kong, Italy, Mexico and Taiwan). A special model designed by Moschino will be available in a several of these countries.

About ELLE
More than a magazine, ELLE is a powerful and recognizable media brand, with a network of 43 international editions, totaling 23 million readers. 24 websites around the world accumulate almost 20 million individual visitors ** and an iPhone application is available in 8 countries.