ELLE Foundation: saving women from the streets in Addis Ababa 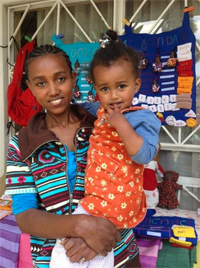 In Addis Ababa, Ethiopia, the ACEDE association welcomes, houses, treats, cares for and provides sewing training to young mothers who have suddenly found themselves on the street.

The story is always essentially the same. Parents are persuaded by an evasive “cousin” to move their daughter to the city so that she can go to school. In exchange, she’ll be expected to “lend a hand” with the household tasks in her host family’s home. In reality, these girls never go to school; instead, they become modern-day slaves to employers who are often violent.
Fleeing the daily abuse and humiliation they suffer, some of them go off with the first boy they meet. When they become pregnant, their “boyfriend” abandons them, and they are thrown into the hell of street life.

These are the young mothers whom Bernadette Haïlé-Fida, founder of the ACEDE association, meets and cares for, along with their babies.

In 2012, all of the young women who took the training provided by ACEDE found a job in local clothing companies, which is a resounding success for this little association that spares no pains to build a better future for the mothers of Addis Ababa, away from the streets.