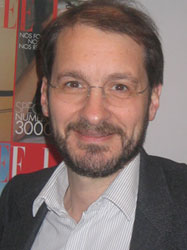 Dag Inge RASMUSSEN, 48 years old, a Norwegian citizen graduated from the French ESSEC Business School, joined LAGARDERE SERVICES in 1988 as an International Business and Financial Controller. In 1991, he was promoted as the Finance and Organization Director at Press Shop, Brussels, then joined AMP, the Belgian press distribution company of the Group, before becoming its General Manager in 1996.

In 1999, he was appointed Chief Operating Officer of LAGARDERE SERVICES. In this capacity, he supervised the companies of the Group located in northern and central Europe, and more recently, in the rest of Europe and in North America.

As the President, Chief Operating Officer of LAGARDERE SERVICES, Dag Inge RASMUSSEN is, from now on, in charge of all operations worldwide.

Operating in twenty-one countries throughout Europe, North America, Asia and the Pacific, LAGARDERE SERVICES is a world leader in Travel retail and Press Distribution, as well as an innovative highstreet retailer.
All over the world, it has benchmark companies in each of these areas of operations with strong brand names such as Relay, Virgin, Newslink in Travel Retail or Inmedio in highstreet and shopping malls.