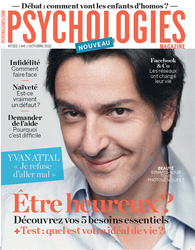 After a highly successful 2011:

In 2012, Psychologies magazine is evolving in form and substance
The magazine has introduced changes in its October issue, on sale as of 26 September, while preserving the key features of its 15-year success: a high-end, women’s magazine style, original, ambitious content and a close relationship with readers.

According to Arnaud de Saint-Simon, French and international director of Psychologies magazine: “Since the magazine’s 1998 relaunch, Psychologies magazine has kept its place at the top and remained faithful to its value policy. Our selling price, which is markedly higher than the high-end, women’s print media market average, is proof of the reading experience’s quality and our readership’s commitment. This relationship also has its demands, including continuous development while keeping a promise that is now more current than ever: helping readers to better live their lives.”

Today, Psychologies magazine is:
The No. 1 high-end women’s monthly*
With 2,644,000 readers** every month
And paid distribution in France of 342,516 copies***
A real global brand, with nine editions worldwide

The website, Psychologies.com , has more than 1,530,000 unique visitors every month****
There have been over 300,000 downloads of the iPhone application
The Facebook community has 48,000 fans
Acts of Kindness Day, launched by Psychologies magazine, has been a huge public and media success for nearly four years, and has just been awarded the CB News Prize for Best Media Coup.