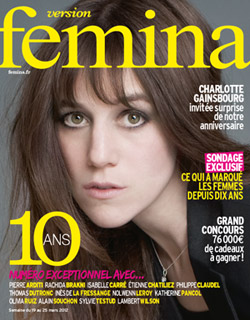 Version Femina, a Lagardère Active publication that is the most popular women’s magazine in France,* is celebrating its 10th anniversary with a special issue.
(Study: France – Source AEPM 2009-2010)

In honour of this major event, the title, with nearly 3.5 million copies* distributed each week, is releasing a special 10th-anniversary issue. It features the exclusive results of a survey performed in collaboration with the Institut Harris Interactive: “Everything that has affected women over the past 10 years,” according to commentary from sociologist Gérard Mermet. To pay homage to its regional distribution, the title also features celebrity testimonials about the French regions dear to their hearts.

In the words of editorial director Constance Poniatowski:
“As our survey confirmed, our readers are truly women of the 21st century, attentive to human values, modernity and the environment. It is in this spirit, with the close ties and positiveness that have been our magazine’s strength for the past 10 years, that we will continue bringing them new content every week.”
In the words of Franck Espiasse-Cabau, publisher of Lagardère Active’s Women’s division: “As we celebrate this major anniversary, we also salute the extremely positive dynamic our magazine has been experiencing since we enhanced it with improved editorial content and coverage of current events. Now a fully-fledged weekly publication, Version Femina will continue its expansion in 2012, in terms of both circulation and projects and initiatives aimed at strengthening ties with its readers.”