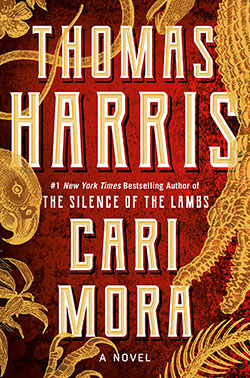 From the creator of Hannibal Lecter and The Silence of the Lambs comes a story of evil, greed, and the consequence of dark obsession

The #1 New York Times Bestselling author of The Silence of the Lambs and the creator of Hannibal Lecter, Thomas Harris, returns with his first standalone thriller since Black Sunday: Cari Mora.

Twenty-five million dollars in cartel gold lies hidden beneath a mansion on the Miami Beach waterfront. Ruthless men have tracked it for years. Leading the pack is Hans-Peter Schneider. Driven by unspeakable appetites, he makes a living fleshing out the violent fantasies of other, richer men.
Cari Mora, caretaker of the house, has escaped from the violence in her native country. She stays in Miami on a wobbly Temporary Protected Status, subject to the iron whim of ICE. She works at many jobs to survive. Beautiful, marked by war, Cari catches the eye of Hans-Peter as he closes in on the treasure. But Cari Mora has surprising skills, and her will to survive has been tested before.
Monsters lurk in the crevices between male desire and female survival.
No other writer in the last century has conjured those monsters with more terrifying brilliance than Thomas Harris. Cari Mora, his sixth novel, is the long-awaited return of an American master.

“The best of Harris’s work, and this includes his latest, long-awaited novel, Cari Mora, has just that feeling of absolute, unquestionable reality. Through a combination of elements–a perfectly realized authorial voice, the steady accumulation of terrible details, an empathetic vision of lost and damaged souls–Harris has created a sense of dreadful intimacy that we cannot escape, that forces us to gaze at unthinkable things, and never look away. No one has illuminated this kind of darkness more thoroughly or effectively than Harris. It seems unlikely that anyone ever will.” The Washington Post

“A less accomplished or ambitious writer might have crafted a worthy thriller with only one or two of the story strands that Mr. Harris weaves; but the several plot elements in Cari Mora are always in fine balance, as befits the work of a unique master still at the top of his strange and chilling form.” Wall Street Journal

“Harris builds the plot skillfully, with violence and betrayal punctuated by moments of calm and reminiscence. The contest for the gold turns into a fight for survival that rockets to the final pages. Cari Mora is a pulse-pounding thriller, and Cari is an engagingly badass character.” Tampa Bay Times

“Cari Mora is at its best as a sustained meditation on the ineffable extent of humankind’s capacity for brutality in the name of personal gain… carries an irony befitting Harris’s ongoing consideration of how light and dark are often interchangeable.” Slant Magazine

“The heist story that makes up the bulk of Cari Mora is inventive and crisp, with a prose style that owes less to the floridness of the last two Hannibal novels than it does to the late and much-lamented Elmore Leonard.” Slate

“Harris explores the dark side of human passion in this pulse-pounding novel. His first book in 13 years, Cari Mora will not disappoint fans of disturbing, taut thrillers.” BookPage