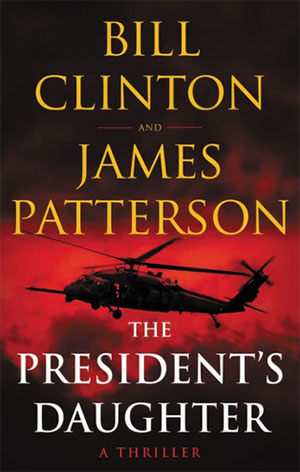 The followup to the bestselling fiction book of 2018, The President Is Missing.

All Presidents have nightmares. This one is about to come true.

Every detail is accurate-
because one of the authors is President Bill Clinton.
The drama and action never stop-
because the other author is James Patterson.

Matthew Keating, a one-time Navy SEAL-and a past president-has always defended his family as staunchly as he has his country. Now those defenses are under attack.

A madman abducts Keating’s teenage daughter, Melanie-turning every parent’s deepest fear into a matter of national security. As the world watches in real time, Keating embarks on a one-man special-ops mission that tests his strengths: as a leader, a warrior, and a father.

The authors’ first collaboration, The President Is Missing, a #1 New York Times bestseller and the #1 bestselling novel of 2018, was praised as “ambitious and wildly readable” (New York Times Book Review) and “a fabulously entertaining thriller” (Pulitzer Prize-winning author Ron Chernow).

“Clinton and Patterson’s standalone sequel to their 2018 thriller, The President Is Missing, puts their respective expertise to good use in a twisting plot.”- TIME

“Brace yourself for a thriller with inside secrets and riveting excitement that only the partnership of Patterson and Clinton could produce. From the president’s opening phone call to the politically tense ending, it’s a page turner with resonance for our times.”- Walter Isaacson, #1 New York Times bestselling author

“The President’s Daughter is an absolute rocket. Rich with authenticity only a president could deliver, this story of a father’s desperate search for his daughter will have readers burning through pages. Clinton and Patterson are simply the best in the thriller business.”-Robert Crais, #1 New York Times bestselling author of the Elvis Cole series

“The President’s Daughter is a smart, taut, utterly fantastic roller coaster that had me holding on for dear life: a combination of every parent’s worst nightmare-a daughter abducted by a terrorist with a scimitar-and the inside world of Washington, DC (a place where, arguably, the knives are pretty damn sharp, too).”- Chris Bohjalian, #1 New York Times bestselling author of Midwives, The Flight Attendant, and Hour of the Witch

“The President’s Daughter is a spellbinding thrill ride that grabs the reader tight on page one and doesn’t let go till the very last page. With lightning-paced prose and a plot that seems terrifyingly plausible, this is one novel you won’t be able to put down.”- Mark Greaney, #1 New York Times bestselling author of Relentless, a Gray Man novel