The President Is Missing: Little, Brown and Company co-published a thriller by Bill Clinton and James Patterson ! 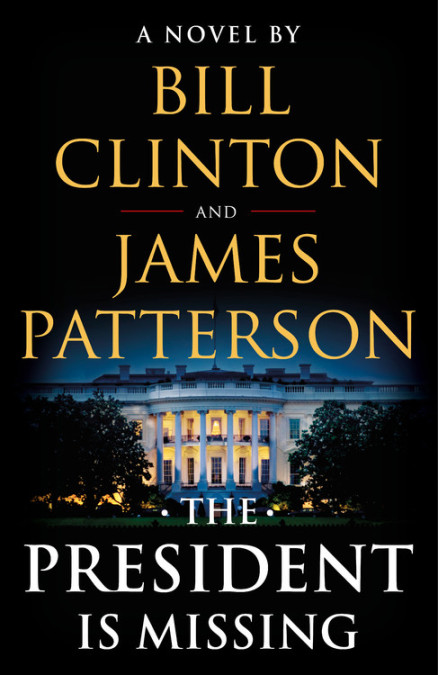 “This book moves like Air Force One. Big and fast. Clinton and Patterson are a dream combo.” – Michael Connelly, author of the Ballard and Bosch series

The publishing event of 2018: Bill Clinton and James Patterson’s The President Is Missing is a superlative thriller. . . one that can really happen, and one that must not be missed.

The President Is Missing confronts a threat so huge that it jeopardizes not just Pennsylvania Avenue and Wall Street, but all of America.

Uncertainty and fear grip the nation. There are whispers of cyberterror and espionage and a traitor in the Cabinet. Even the President himself becomes a suspect, and then he disappears from public view . . .

Set over the course of three days, The President Is Missing sheds a stunning light upon the inner workings and vulnerabilities of our nation.

Filled with information that only a former Commander-in-Chief could know, this is the most authentic, terrifying novel to come along in many years. And a timely, historic story that will be read-and talked about-for years to come.

Bill Clinton was elected President of the United States in 1992, and he served until 2001. After leaving the White House, he established the Clinton Foundation, which helps improve global health, increase opportunity for girls and women, reduce childhood obesity and preventable diseases, create economic opportunity and growth, and address the effects of climate change. He is the author of a number of nonfiction works, including My Life, which was a #1 international bestseller. The President is Missing is his first novel.

James Patterson is the world’s bestselling author, best known for his many enduring fictional characters and series, including Alex Cross, the Women’s Murder Club, Michael Bennett, Maximum Ride, Middle School, I Funny, and Jacky Ha-Ha. Patterson’s writing career is characterized by a single mission: to prove to everyone, from children to adults, that there is no such thing as a person who “doesn’t like to read,” only people who haven’t found the right book. He’s given over a million books to schoolkids and over forty million dollars to support education, and endowed over five thousand college scholarships for teachers. He writes full-time and lives in Florida with his family.

James Patterson: Well, thank you. President Clinton and I have written a novel together, it’s called The President Is Missing. It’s about a United States President who’s involved in a terrifying world crisis and goes missing. Sound dramatic? It is.

President Bill Clinton: I’m not going to spoil the suspense and tell you where the president is or why he’s missing. In other words, you have to read The President Is Missing to find out the ending. I think that’s more than fair.

James Patterson: I agree. But we will tell you this much. The President Is Missing will take you right into the White House. This novel will make you feel the impossible decisions, the stress, the dangers out there in today’s world. And the importance of the American presidency.

President Bill Clinton: Being president is a profound honor, but it can also be the most difficult job in the world. Because every day brings something new, and it’s not all good.

James Patterson: The following cliché happens to be true about The President Is Missing: you absolutely, positively, will not put this novel down. It’s full of twists and turns, kind of like being president.

President Bill Clinton: Jim, you have no idea.