Fashion has its heart in the right place!

In a publishing “first” , more than 30 editions of ELLE magazine* team up with Bono, Gisele Bündchen and Scarlett Johansson in the fight against AIDS in Africa. In just over 2 years, (RED), together with major partner brands, has raised over 120 million USD to help eliminate AIDS in Africa. 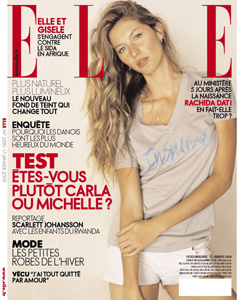 To support this project, the ELLE network will simultaneously publish a feature on (RED) in more than thirty editions
(most of them on the magazine cover), and for six consecutive weeks will become a spectacular editorial showcase in
the service of a great humanitarian cause. An original project carried by exceptional ambassadors : Gisele Bündchen
and Scarlett Johansson.
Such an editorial event shows the strong commitment of ELLE magazine. By launching this large-scale initiative,
ELLE is backing (RED), a brand created in the UK in 2006 by Bono, lead singer of U2 and Bobby Shriver, an
American philanthropist, to help HIV-positive women and children in Africa. Money is raised thanks to the involvement
of partner brands who design and sell specific (RED) branded products and contribute up to 50 % of the proceeds
to the Global Fund**.
The great number of countries involved and the simultaneous publication of the same feature article across
the ELLE network make this a global “first” in publishing. From mid-January to the end of February, ELLE will speak with one voice to more than 20 million readers through some thirty international editions and to over 11 million Internauts !
The issue will appear on 17 January 2009 in ELLE France and in the February issues of 30 other international
editions on sale in mid-January (except for the USA, UK, Japan and Quebec editions which will be dated March
2009 and go on sale end of January/early February).

…A story about fashion and kindheartedness