The Creation of Team Lagardère

At 9:00 am on Tuesday 17 May 2005 at the Paris Jean-Bouin stadium, Arnaud Lagardère presented the first stage of his company’s corporate strategy in the field of the sports.

He recalled its involvement in the Paris Jean-Bouin club and its support for some of the brightest stars in French tennis (Richard Gasquet, Michaël Jeremiasz, Nicolas Mahut, Paul-Henri Mathieu, Gaël Monfils, Arnaud di Pasquale).

He then announced the creation of Team Lagardère and its technical coaching support platform, initiated by Xavier Moreau (Sports Manager of Paris Jean-Bouin), which will be directed by a management team composed of the following members: 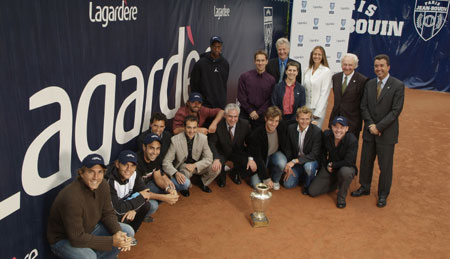 This constitutes the Lagardère Group’s first venture into the area of sports content. Focusing initially on tennis, Team Lagardère’s mission is to rapidly becoming a multi-sport organization.

For Arnaud Lagardère, “This policy in the field of sports is an approach that makes sense for the Lagardère Group. It is a new opportunity to express our aspirations to achieve optimal levels of responsiveness, performance and progress. We are committed to building an innovative sports strategy over the long-term, on a human scale, that will reflect excellence and passion. With Team Lagardère, our objective is to create a unique undertaking that will become a leader in its field.“