By Toutatis! Many surprises await you in Asterix and the Griffin, available at bookstores starting 21 October 2021.

Asterix and the Griffin

This new Asterix album introduces us to a terrifying and troubling creature, the Griffin.

The story naturally also features our two favourite Gauls, Asterix and Obelix, accompanied by their faithful canine friend Dogmatix, perched on top of a tree trunk representing the Griffin. In a first for the Asterix series, the three are depicted in an entirely snow-covered landscape. 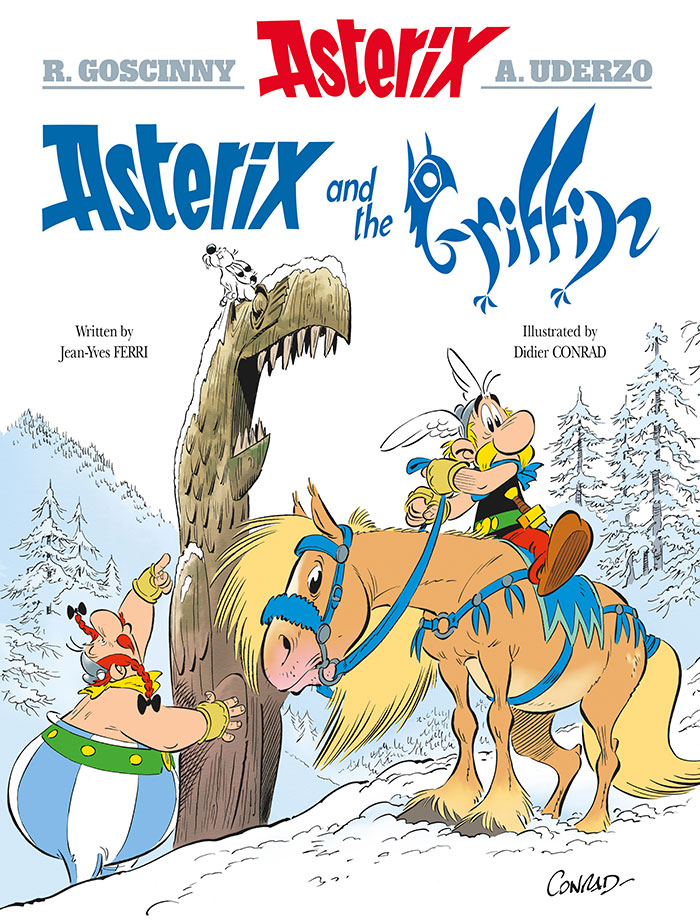 (Press kit only in french version)

And with good reason: in this new album, Asterix and Obelix leave their village in Gaul in search of the Griffin. Their journey will take them through a land loosely inspired by Slavic folklore, reminiscent of Ukraine, Mongolia and Russia, where snow is omnipresent. Along their way, they will encounter the Sarmatians, a people with a very particular social structure who live in harmony with nature.

And since no Asterix album can be without Romans who will do anything to serve the Empire, three Romans will also set out to find the Griffin: the centurion Dansonjus, the hunter Jolicursus and the geographer Cartographus. Will this trio of leaders, so unlike the Romans that are typically terrorised by the stubborn Gauls, manage to get their hands on the Griffon before Asterix and Obelix do?

The story will be available in three formats. In addition to the classic edition, Asterix and the Griffin will also be released in a luxury edition. 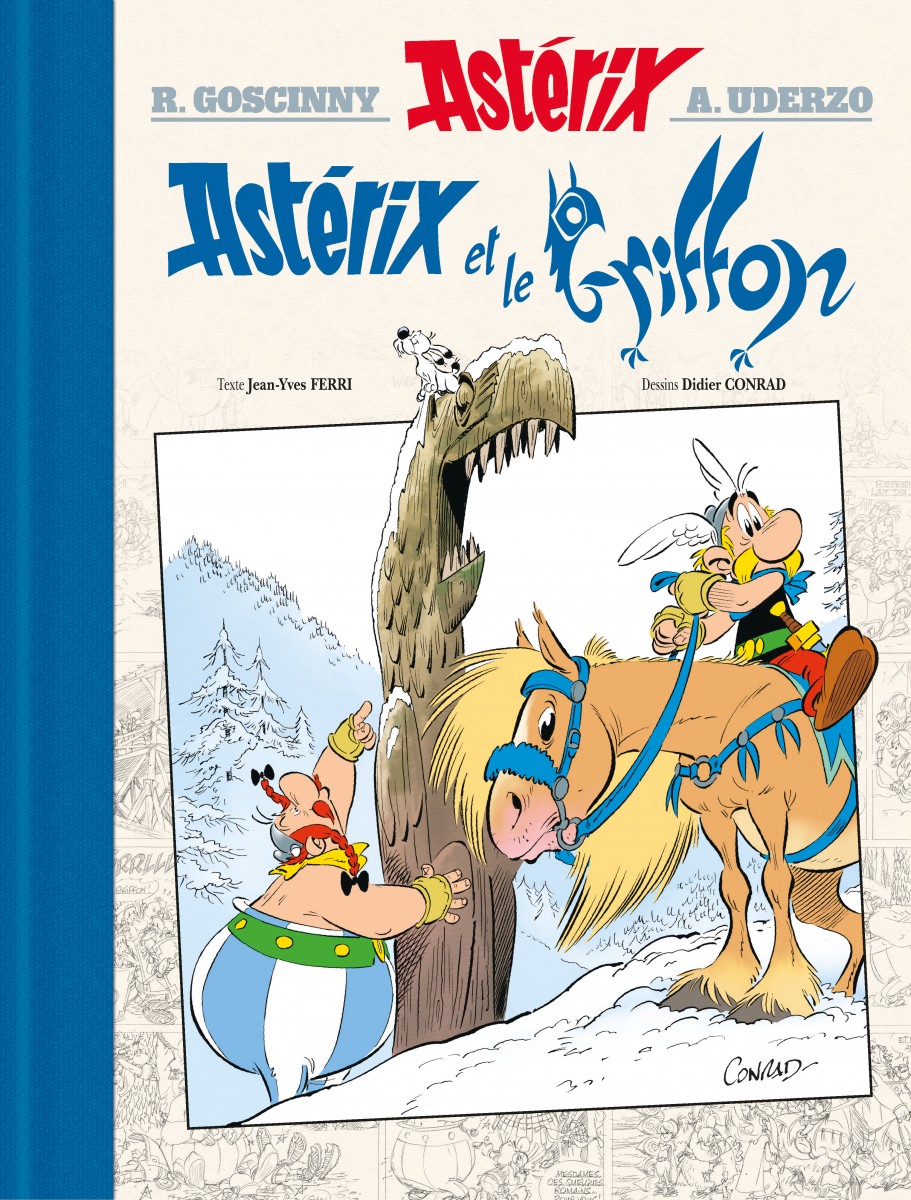 All the illustrations from this new album, and the work required to make them, can also be discovered in detail in the special artbook devoted to the story.

Inside: the album in colour, all the original sketches and a 30-page section showing many new drawings and preparatory documents by Jean-Yves Ferri and Didier Conrad. 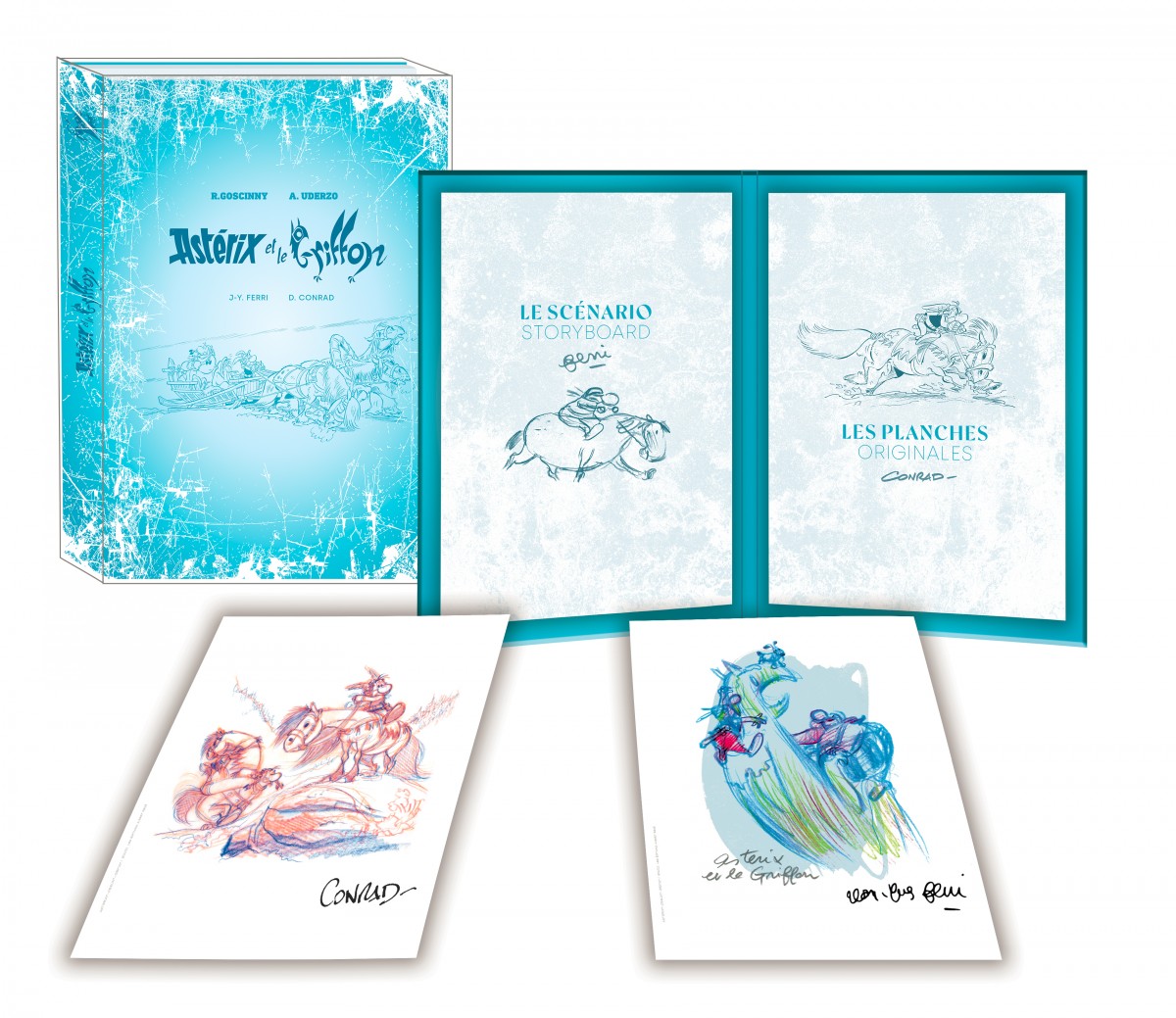 “This is the last album that Albert Uderzo approved,” explained Isabelle Magnac, Managing Director of Hachette Illustré, in an interview with Livres Hebdo. This 39th album is still very mysterious, but we can already see from a teaser panel that the heroes will not stay in the village. We know that Asterix, Obelix, Getafix and Dogmatix must rush off to a still undisclosed location to help an acquaintance of the druid. 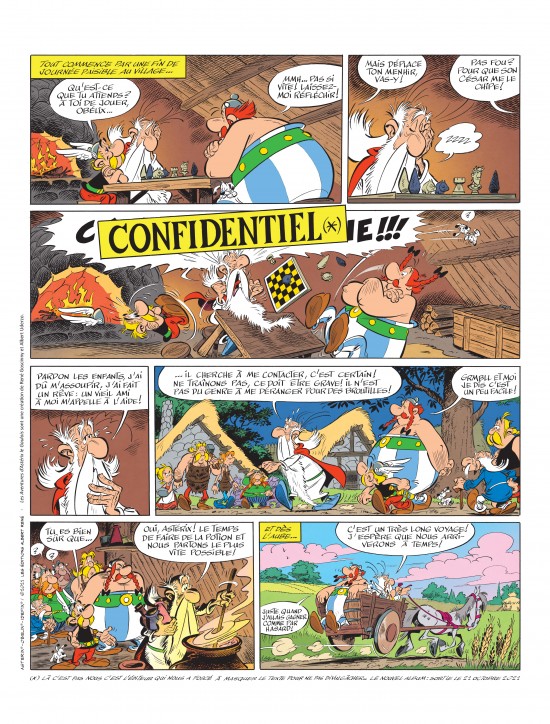 Watch the teaser video (only in french version)

Watch the cover reveal video (only in french version)

2021 is also when shooting begins for the next film by director and actor Guillaume Canet: Asterix and Obelix: The Middle Kingdom. The cast includes Gilles Lellouche, Marion Cotillard, Jonathan Cohen and Vincent Cassel.

An exhibition on the 70th anniversary of the birth of Europe 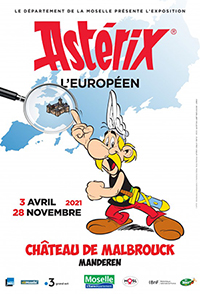 You can also visit the Asterix the European exhibition at Malbrouck Castle in the Moselle region of France until 28 November 2021. The displays will take you on a tour around Europe via Asterix’s travels among the Goths, the Picts, the Belgians, the Helvetians, Hispania, Greece, Italy and the Bretons.

Initially planned for 2020, the exhibition was postponed due to the pandemic. For the record, Coronavirus happens to also be a character the famous Gaul faced in one of his last albums, Asterix and the Transitalia, released in 2017.

This exhibition will also honour Albert Uderzo, who died in March 2020.

A series dedicated to Dogmatix

Asterix and Obelix’s famous pet, Dogmatix, is the hero of the animated series Dogmatix and the Indomitables (Idéfix et les irréductibles), released in September 2021. Aimed at younger children (aged five to 11), it will reveal how the little white dog lived in Lutetia, two years before meeting Obelix. Broadcast on France Télévision’s Okoo children’s channel, Dogmatix and the Indomitables is made up of 52 fully 3D 12-minute episodes. This enormous work is directed by Charles Vaucelle (Oggy et les cafards).

Hachette Livre founded an audio-visual subsidiary (Studio 58) for this series written by Matthieu Choquet and narrated by Stephane Bern. The project took five years to develop.

Many more wonderful things are still in store for our favourite Gauls!