France retains its place as the world’s fifth-ranked sporting power, China threatens the USA, and the UK is coming on strong 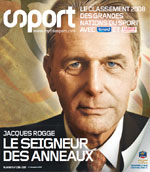 For the fourth consecutive year, Havas Sports & Entertainment, Sport magazine and Europe 1 have published the world rankings of major sporting nations. This exclusive study, which aims to produce an annual hierarchy of national sporting powers, will appear on Friday 12 December in Sport magazine and – thanks to a partnership with sports weekly Titan Sport – in China as well. The listing takes into account all medallists from all worldwide competitions (including the Olympic Games), covering almost 150 disciplines for a total of 4,912 medals.

This being the end of an Olympic year, the list serves as a benchmark, providing a comprehensive, up-to-date overview of national strengths on the international sporting scene.

China reaps rewards from the Beijing Games
In the general national listings, China boosted the No. 2 position it first gained last year (with 132 titles and 280 medals in 2007), closing in on the USA’s lead this year with 155 titles and a total of 326 medals; in fact, it even ranked first for men-only events. These results were due in particular to China’s excellent results at the Beijing Games, where it won 19 more gold medals than in Athens in 2004. China’s strategy of excellence appears to be bearing exceptional fruit, especially since its athletes are involved in relatively few disciplines. When they do participate, however, they regularly have gold medals in their sights: some 48% of China’s 326 medals were gold, compared to an average of 33% for other countries!

The USA loses some ground
Nevertheless, the USA still has a substantial lead in the rankings, with 195 titles and a total of 566 medals. Even though their lead is less than in previous years (19 fewer titles than in 2007, and only 40 titles ahead of China compared with 82 a year ago), they are No. 1 in 11 sports out of 52 (against eight in 2007), proof of their unchallenged dominance in certain disciplines.

France holds steady
France remains in fifth place despite a drop in its title numbers (82 gold medals, against 92 in 2007) and medal total (287, against 298 in 2007). However, its distance behind Germany (in fourth place, with 104 titles and 317 medals) and lead over Italy (ranked sixth, with 74 titles and 235 medals) remain constant because these two countries experienced comparable fall-off. Unlike China, France has a presence in a very wide range of sports and disciplines, but with a lower degree of dominance (30% gold medals).

The UK is already preparing for London 2012
The UK moved up three rungs – the greatest improvement in the Top 10 – to seventh place, with 68 titles and 174 medals in total (against 41 gold medals and 142 medals in total for 2007), a terrific 66% increase in its gold medal total. When it comes to single titles obtained since 1 January 2008, Britain places fifth in the rankings behind the USA, China, Germany and Russia, illustrating the serious efforts the UK is putting into boosting its high-level sporting prowess prior to the 2012 London Olympics.

This study encompasses 52 sports,* 149 disciplines and 1,577 different events. The rankings take into account the gold, silver and bronze medals won by each nation in the most recent Olympic Games (summer and winter), most recent World Championships, and – in some disciplines – the latest world rankings and benchmark competitions (like the ATP and Tour de France). In total, 4,912 medals were analyzed. As at the Olympic Games, these rankings are drawn up in decreasing order according to the number of first places won. Likewise, the principle of equality is respected, because all sports are considered equal: gold medals all have the same value, regardless of the discipline. In total, 126 different countries won at least one medal.

ALL RANKINGS CAN BE VIEWED AT WWW.MYFREESPORT.FR, WWW.EUROPE1.FR AND WWW.HAVASSPORTS.FR AS OF 6:00 PM ON THURSDAY 11 DECEMBER.

About Havas Sports & Entertainment
Havas Sports & Entertainment is Havas Media’s global sports and entertainment communications network. It currently operates through offices in France, the UK, Spain, Italy, China, India, Malaysia, Argentina, Mexico, Chile and Poland, and is looking to expand into other markets in the near future.
Its 400 employees provide advertisers and institutions with strategic and operational support in all their communications projects. Its core capabilities involve all areas of sponsorship and brand integration, including partnership assessment and engineering, strategic planning, creation and implementation of activation programmes, and performance assessment. Havas Sports & Entertainment develops comprehensive communications solutions to connect brands to the world of sport, TV programmes, films, music, video games, culture and social development programmes by creating and delivering unique experiences and content to consumers.
The Havas Sports & Entertainment network already counts among its clients such major advertisers as Coca-Cola, Adidas, Bank of China, Coty, McDonald’s, Veolia, Repsol, Carrefour, Orange, Unilever, Satyam, Santander, Winterthur, EDF & EDF Energy, Air Asia, Puig, Nintendo, Motorola, PSA, Reckitt Benckiser and LVMH, and such organizations as the Argentine Tennis Association, the Association of Tennis Professionals, the English Premier League and the French Golf Federation.

About Sport and Myfreesport
Sport magazine and the myfreesport.com website represent a unique platform for sports and leisure content.
Launched in 2004, the free weekly magazine Sport is distributed in all of France’s major cities, with circulation of 530,000 copies (OJD 2008 average). Every Friday, it produces a resolutely newsy magazine with an offbeat style and quirky tone.
The myfreesport.com website has experienced undeniable success since its launch in 2006. France’s fifth-largest sports media site, myfreesport.com offers comprehensive editorial coverage based on 2.0 technology: expert commentary and analysis of top-notch sports, plus freestyle and leisure positioning that today attracts over a million visits per month (Nielsen – December 2007).

About Europe 1
Back to basics for Europe 1: since September 2008, this station – located on Rue Francois 1er – has changed its focus. A long-time news and information radio station, Europe 1 is now also the station for sporting events and discussion.

Every evening, Monday through Thursday, Alexandre Delperier takes to the air with two and a half hours of sports information, events and discussion. On Friday evenings, Alexandre Ruiz presents Multiplex, and then takes to the airwaves on Saturday and Sunday with afternoon and evening sports. Live broadcasts, talk radio and all the major sporting events – Europe 1 now covers it all!