The Lagardère Group, along with 29 other companies and organizations, has launched #StOpE to fight against everyday sexism in the workplace 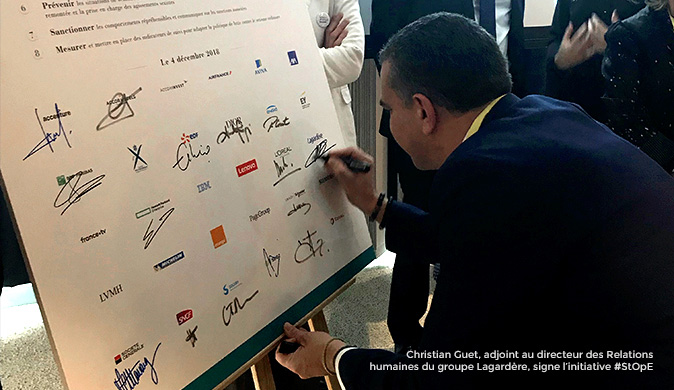 Thirty companies and organizations, including the Lagardère group, have created the #StOpE initiative instigated by AccorHotels, EY and L’Oréal France.
On Tuesday 4 December 2018, thirty companies and organizations1 signed a collective commitment to combat everyday sexism in the workplace, under the patronage of Marlène Schiappa, Secretary of State in charge of equality between women and men and the fight against discrimination.
In a context where 80%2 of working women say they are confronted with sexist acts in the workplace, including actions, words and behaviour which, often unintentionally or insidiously, exclude, belittle and discredit women in their daily lives at work, the #StOpE initiative’s goal is to share and promote good practices in the fight against sexism and create a group of companies and managers committed to this cause.
Close to 100 representatives of the operational, executive and HR functions at the companies and organizations involved, in partnership with Brigitte Grésy, an expert on equality questions, have spent three months working on the initiative, resulting in a booklet of good practices centring on eight major themes. 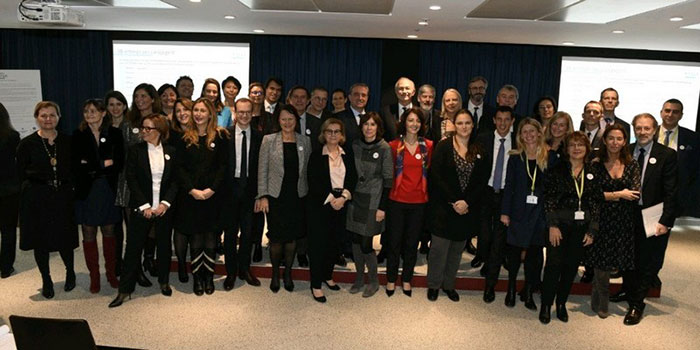 By signing up to the #StOpE initiative, these companies and organizations undertake to push back against everyday sexism and, over the next year, roll out at least one of the following eight priority actions internally:

1. display and apply the zero tolerance principle;
2. communicate to raise awareness of sexist behaviour (acts, words, attitudes) and its impact;
3. organize targeted training covering the obligations and good practices involved in the fight against everyday sexism;
4. provide employees with learning tools to help them tackle sexist behaviour in the workplace;
5. encourage all employees to help prevent and identify sexist behaviour and respond to everyday sexism;
6. anticipate situations where sexism can occur and provide personalized support for victims, witnesses and directors in reporting and dealing with sexist acts;
7. penalize unacceptable behaviour and publicize the measures taken;
8. assess and implement monitoring indicators for adapting the policies adopted to fight against everyday sexism.
The companies and organizations engaged in the initiative will meet once a year to review actions undertaken and adjust priority areas to reflect progress made and ensure the initiative is durable.

“We are proud to have initiated this project with the EY and L’Oréal France teams because we immediately received positive feedback, proof that the issue is highly relevant. Thirty companies and organizations are now committed to taking concrete action and we hope that others will join the movement.“
Anne-Sophie Béraud, vice-president of the AccorHotels Diversity & Inclusion Group

“The commitment and booklet are the result of a considerable amount of collective work. I was particularly impressed by the depth and range of the working group’s discussions and pragmatism of the ideas it produced. We pooled the best of the results from our research in the field and now have a set of good practices we can use to go further down this path together.“
Morgane Reckel, associate director of Diversity and Inclusion for EY

“We’re proud to have launched the #Stope initiative with AccorHotels and EY. It’s the fruit of a collective and spontaneous working process. As responsible companies and organizations, we all concerned by the push to get rid of these words, gestures and attitudes and the everyday sexism they represent. Thirty companies and organizations worked hand in hand for several months to bring about a shift in behaviour. We’ll be meeting up in a year’s time to assess the work everyone has undertaken to banish sexism from our companies and organizations.“
Anne Laure Thomas, director of Diversity and Inclusion at L’Oréal France.