Home » Communiqués de presse » Take Gulli with you wherever you go with the new Gulli iPad app!

Take Gulli with you wherever you go with the new Gulli iPad app! 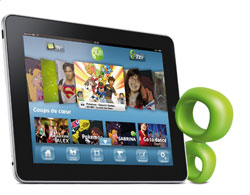 To celebrate its fifth anniversary, Gulli has just launched a highly creative, free application for the entire family that runs on Apple’s legendary tablet device.

Gulli is pursuing its digital-entertainment development by boosting its presence on interactive media. With Gulli iPad, families can take the world of Gulli with them wherever they go.

The Gulli app lets viewers watch their favourite programmes in real time via live access to the channel. It also offers hundreds of programmes on demand via its Catch-Up TV function (Gulli Replay) and VOD, which is coming soon to the Gulli corner at the iTunes Store with a wide choice of cartoons, movies, series, drama, comedy and live-audience broadcasts, all enhanced on a daily basis.

Gulli iPad allows users to create, personalize and manage a profile for each family member and receive personalized recommendations based on age, favourite programmes and individual preferences.

A single Internet/iPad account optimizes access to profiles and favourites, and users are informed in real time of the latest Replay and VOD releases via a special alert system.

The application also offers social networking functions, including mail-sharing and Facebook Connect for users 13 and up.

Gulli iPad revolutionizes the way video is streamed at the App Store thanks to a fun, easy-to-use wheel that controls the video player in both Live and Replay modes with the following functions: Play/Pause/Add to favourites/Scroll/Share on Facebook or E-mail a friend.

A timer allows parents to configure the amount of time the application can be used by their children. Once the allotted time has been used up, the application switches to Standby mode and the famous Gulli G starts snoozing! A parental code must then be entered to unlock the application and restart the viewing session.

According to Antoine Villeneuve, Lagardère Active’s executive director for television channels, France and International, “Gulli iPad is an integral part of our strategy aimed at making Gulli a true entertainment destination for the entire family by expanding the scope of the channel. Incidentally, the application just won the 2010 Gold Award for Best Tablet Application in the first Mobile Awards organized by Stratégies magazine. This is a real incentive for our teams and proof of the timeliness of our applications and the synergies among our talented team members. This launch also demonstrates once again the uncompromising quality of our brands and content over the full range of media.”

The application is an integral part of the Gulli “ecosystem” and will benefit from cross-promotion deployed in conjunction with the brand’s multi-platform strategy (Internet/TV/mobile/press). A broad-based communications campaign accompanied its launch in the second half of December, on TV, in the press (Journal du Dimanche and Télé7Jours), on the Internet (on the social networking sites FaceBook, Youtube and DailyMotion) and on iPad, together with the other applications developed to date by Lagardère Active (including the Elle à Table and Paris Match apps).

About Gulli, the TV channel that entertains the whole family

It has already been five years since the launch of Gulli, France's first free channel for children, young people and their families. In 2010, Gulli became France's best-known children's channel. This did not happen by chance; Gulli earned its loyal following through:

Get into the Gulli spirit at: