Success for the cult-food recipe series 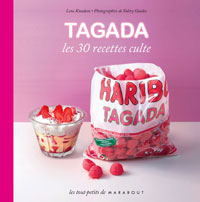 On 18 January, Marabout released eight new titles in its Timeless Favourites recipe book series. If you want something sweet, try the books devoted to Tagada® strawberries or Smarties®. For something chocolatey, there are books on Mars® bars and the ever-popular Milka® chocolate. For a simple snack, try the book on Saint Michel® biscuits. On the other hand, if you’re in the mood for something savoury, you might prefer the Roquefort® or Amora® recipes. These books bring you classics and childhood favourites with a twist.

This collection of mini-books celebrating beloved food items, priced at €3.50 per volume, has been a hit since its launch in May 2011. The first 13 books (covering Nutella, Carambar, Marshmallow Bear, Speculaas, Coquillettes, Laughing Cow, Condensed Milk, LU Butter Biscuits, Sardines, Chestnut Cream, Kiri, Chamallows and Michoko) have sold over 1.2 million copies. The Nutella book sold more than 130,000 copies alone and ranked No. 1 for sales in the “how-to” category, while five others from the series were in the Top 15 between 24 October and 24 November 2011 (source: Livres Hebdo/Ipsos).