SPORTFIVE, the international sports marketing agency owned by Lagardère Unlimited, has
been appointed Official Hospitality Agency for the FEI AlltechTM World Equestrian Games 2014 in Normandy. The contract includes the global hospitality sales rights for this year’s edition which will take place from August 23rd to September 7th in Normandy in France.

The World Equestrian Games are held once every four years and bring together the best equestrians from more than 60 countries to compete in the eight official disciplines recognised by the Fédération Equestre Internationale (FEI). The Games were launched in 1990 and will come to France for the first time this year. There is great excitement in
Normandy, where half a million spectators are expected to attend.

The leading hospitality agency in France, SPORTFIVE collaborates with a number of prestigious sports events, both in France and on an international scale. This agreement with the World Equestrian Games enables SPORTFIVE to further strengthen its portfolio of hospitality rights which includes, amongst others: 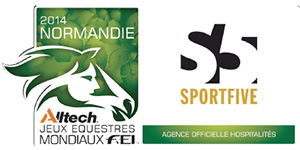