As part of a multi-year contract, SPORTFIVE, a subsidiary of Lagardère Unlimited and the international leader in sports marketing, has been appointed as exclusive agent for Nitro Circus Live, the youth entertainment phenomenon, to manage the sale of the marketing rights for its European tour scheduled to start in autumn 2013. 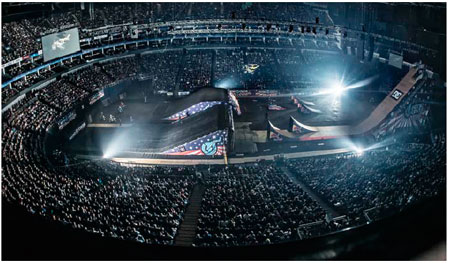 Travis Pastrana, 17-times X Games medallist and emblematic figure of extreme sports, and his troupe, started expanding the boundaries of what is reasonable in a television programme entitled “Nitro Circus”, which was broadcast in around sixty countries.

Since 2010, in a series of breathtaking live spectaculars performed across Europe, Australia, New Zealand and Las Vegas, the team has developed the largest action sports touring act, known as “Nitro Circus Live”. These fully choreographed, two-and-a-half hour shows combine routines executed by the world’s best FMX (freestyle motocross) athletes on the planet, BMX, skateboard, scooter and other crazy contraptions and have already been seen in sell-out arenas by 750,000 people worldwide.

Nitro Circus Live completed their first European tour in December last year, with 13 shows that were watched by over 140,000 people in 11 cities including a sold-out O2 Arena in London and 30,000 spectators in Holland. Following the success of this first tour, Nitro Circus Live will once again set out on the European trail in the autumn of 2013 for a further series of 20 shows.

Michael Porra, Chief Executive Officer of Nitro Circus Live said, “We are excited to be back in Europe for a second Nitro Circus Live tour on the back of the hugely successful 2012 tour. We look forward to working with the best entertainment and marketing specialists in Europe. I am convinced that SPORTFIVE will ensure that our brand is an optimal opportunity for companies throughout Europe to engage with our audiences, not only at our sell-out shows, but also year-round with our highly engaged followers, digital audiences and television programming.”

Vincent Tong Cuong, Managing Director of SPORTFIVE France said, “We are particularly proud to have been chosen by Nitro Circus Live as exclusive agents for the sale of the marketing rights for their next European tour. It is our proven expertise in the area of entertainment and major events that led to us being chosen for this contract. We will place all SPORTFIVE’s skills at the disposal of the show organisers to successfully carry out the commercial and media promotion of this major event.”

About Nitro Circus Live
The Nitro Circus brand, founded by Travis Pastrana, Gregg Godfrey and Jeremy Rawle has enjoyed a rapid rise to global popularity, started by the innovative DVD series featuring Pastrana and friends performing outrageous stunts on a range of crazy contraptions. In 2009, they partnered with MTV to create a new smash hit TV series produced by Godfrey Entertainment and Dickhouse Productions (producers of Jackass movie franchise), which has aired to huge ratings in over 60 countries over two seasons.Nitro Circus Live was created through a partnership between the creators of Nitro Circus and Australian based sports marketing & events company, Global Action Sports, headed by Managing Director, Michael Porra. The first ever tour in Australia became the highest grossing action sports show in Australian history with almost 120,000 tickets sold. In 2011, Nitro Circus Live performed a record-breaking tour of New Zealand, which out-sold global performing acts such as AC/DC. The sold out, one-off show in Las Vegas followed in June 2011 and in December 2011, Nitro Circus Live debuted at number 16 on BRW's list of Top 50 Entertainers. In 2012, Nitro Circus Live returned to Australia, and once again performed in front of over 110,000 spectators across five capital cities.In late 2012 Nitro Circus Live embarked on its first ever European tour, performing 13 shows in seven countries and selling over 150,000 tickets. The tour included Nitro Circus Live's biggest ever show, performed in front of 30,000 people in Arnhem, Holland. 2013 will be a watershed year for the Nitro Circus franchise with tours of New Zealand, Australia, Asia, Europe and South Africa on the agenda as well as the global release of the Nitro Circus 3D Movie across cinemas worldwide.To date, Nitro Circus Live has sold over 750,000 tickets.

About SPORTFIVE and Lagardère Unlimited
SPORTFIVE, a subsidiary of Lagardère Unlimited, is an international sports marketing agency and the European and African leader in the management of marketing and media rights for sports. SPORTFIVE offers sporting clubs, federations and events its unique experience and know-how in professional sports management: negotiating TV rights at international level, advertising in stadiums, sponsorship and hospitality programmes. The agency represents the marketing interests of the Confederation of African Football (CAF), of 37 European federations, of more than 10 professional leagues and over 40 football clubs.
A division of the Lagardère Group dedicated to Sport and Entertainment, Lagardère Unlimited deploys its international expertise in six complementary business lines: event management; talent representation; venue consulting ; sale of marketing rights and products; management of distribution rights; and management of sports training academies.
Lagardère Unlimited employs over 1,200 people, and its activity extends over three international zones: Europe and Africa, United States and South America, Asia-Pacific and the Middle East.