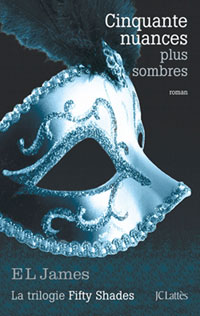 The book
Overwhelmed by Christian Grey’s dark secrets, Ana Steele has broken off their relationship in order to focus on her editing career – but her desire for Grey still occupies all her thoughts, and when he proposes a new arrangement, she can’t resist.

Little by little, she learns more about the painful past of her mysterious Mr. Fifty Shades, who is still as passionate as ever. While Christian battles his inner demons, Ana must make the most important decision of her life.

Translated from the English by Aurélie Tronchet

Cinquante nuances plus claires (Fifty Shades Freed), the French edition of the Fifty Shades trilogy’s third volume, will be published on 6 February 2013.

The author
E. L. James, a former television producer and married mother of two, lives in London. Since earliest childhood, she had dreamed of writing tales that readers would fall in love with, but she put her dreams on hold to devote herself to her family and career. Eventually, however, she found the courage to take up her pen to write her first novel, Fifty Shades of Grey. She is also the author of Fifty Shades Darker and Fifty Shades Freed.