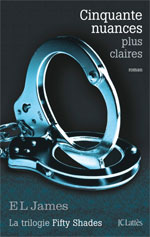 After selling a million copies of volume 1 and 650,000 copies of volume 2*, Lattès Editions are now releasing the third and final volume of the “Fifty Shades” trilogy in French entitled Cinquante nuances plus claires (English title: Fifty Shades Freed).

The book
A meeting between Ana Steele and Christian Grey, an ambitious but troubled business magnate, quickly drew them into a torrid love affair that disrupted their lives forever.
Ana always knew that her love affair with Grey would be stormy, but their life together presents challenges that neither had anticipated. Ana must somehow learn to share Grey’s opulent lifestyle without sacrificing her own integrity or independence; and Grey must overcome his compulsion to control as he wrestles with the demons of a tormented past.
Finally reunited, they have everything: love, passion, intimacy, and an infinite wealth of possibilities.
But even as life fulfils their every wish, misfortune and fate conspire to plunge Ana into her worst nightmare…

Translated from the English by Denyse Beaulieu

The author
E. L. James, a former television producer and married mother of two, lives in London. Since earliest childhood, she had dreamed of writing tales that readers would fall in love with, but she put her dreams on hold to devote herself to her family and career. Eventually, however, she found the courage to take up her pen to write her first novel, Fifty Shades of Grey. She is also the author of Fifty Shades Darker and Fifty Shades Freed (French title: Cinquante nuances plus claires).