The Psychologies Group, with the support of Lagardère Active, is continuing to deploy its brand abroad with the launch of a new edition of its magazine for Belgium – the 11th international edition to date.

Published under license by Edition Ventures (Elle Belgique), this new edition comprises two magazines sold separately, one in French and the other in Dutch (Flemish). Edition Ventures set up two editorial teams to accomplish this, both based in Brussels and each representing one of the two main Belgian communities: the Walloon (French-speaking) and Flemish (Dutch-speaking) populations.

As a way of addressing the country’s cultural divisions, the first issue of the French-language edition looks at how “mixed” couples deal with cultural tensions while the Dutch-language edition examines the concept of solidarity during the economic crisis. 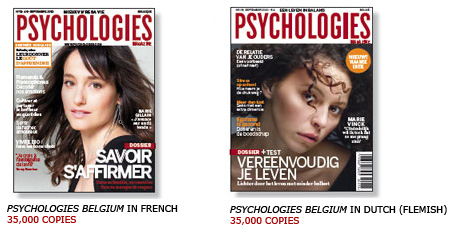 According to Arnaud de Saint-Simon, chairman of the Psychologies Group, “This partnership allows us to do more than we could with the Belgian version we were producing in Paris. This second launch in 2010, after Greece in April, confirms Psychologies Magazine’s position as a major international brand.”

About the Psychologies Group

Psychologies Magazine now has a total network of 12 editions worldwide (France plus international) and is read every month by nearly 5 million readers who want to live better lives.