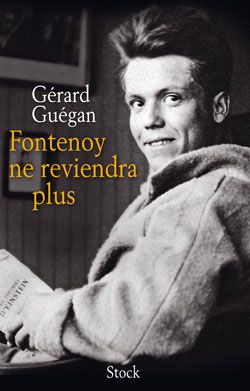 Fontenoy ne reviendra plus
“Since I came from an era, or even a world, where everyone swore to remain eternally faithful to his or her beliefs, I often asked myself why so many enthusiastic individuals fairly soon turned the page of their youth. This question – what makes someone change sides, switching, for example, from the most fanatical left to the least merciful right – ended up becoming an obsession for me. I could have made my ideas into just a pamphlet, except that I wanted them to reach a wider audience so I wouldn’t be preaching only to the choir. I also resuscitated a writer from the last century: Jean Fontenoy, who, to use the words of Malraux, was a part of everything that counted, at least in his first 20 years: the Great War, Dadaism, the Bolshevik Revolution, Mayakovski, Lenin and Trotsky, Moscow, Shanghai – and the list goes on. Although he was born poor, had been honoured by France, and had seen his books win the admiration of Kessel, Colette, Blanchot and Céline, and contrary to all expectations (as he had denounced Nazism in 1933), he suddenly became a fascist himself. A few years later, not without a certain logic (and also from a hatred of cowardice), he committed suicide in Berlin as it was under siege by the Red Army. However, I wrote Fontenoy Ne Reviendra Plus only to understand what we are made of and what our destinies – and our refusals – depend upon” – Gérard Guégan

Neither story nor biography, Gérard Guégan’s new book covers a figure who seems so fictional, and who has such a tragic destiny, that the work resembles literature more than any other genre. It is the novel of Fontenoy, telling of his commitments, loves, obsessions and disguises. It is the story of a man who we want to meet and to run away from, to love and to leave at the same time, just as he never stopped leaving his own self.

It is undoubtedly Brice Parain who described Fontenoy best, before Gérard Guégan: “There was Jean (Fontenoy). I didn’t have any other friends because the others that I knew were or are less honest than him. They were chameleons to their very core. He was a chameleon himself, as you say, but he was not dishonest when it came to things like literature or poetry. He preferred to become a thug rather than a protégé of Paulhan, which is saying quite a lot.”