This morning, Laura Flessel officially launched an athletic and educational support initiative for young fencing hopefuls. The first group of athletes selected for Envole-toi (loosely translated as “Spread Your Wings”) comprises four young epeeists: Marie-Florence Candassamy, Lauren Rembi, Laurence Epee and Constance Pradier. The objective is to get them ready to qualify for the French national team and then prepare them for the 2012 Olympic Games, while also providing them with personalized educational support.

These young women were chosen after a rigorous selection process, conducted by Laura Flessel with invaluable assistance from officials of the French Fencing Federation’s National Technical Department. “Their fencing levels are very good,” says Flessel, “and, more importantly, they are ambitious enough to be willing to combine their studies with the intensive practice required for top-level sports.” 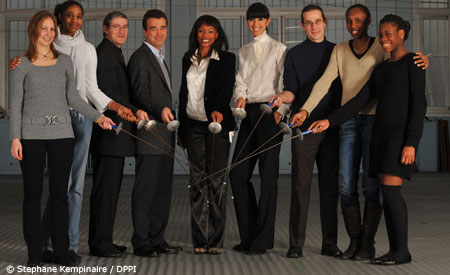 The programme includes training sessions in France and abroad, where they will test themselves against some of the world’s top fencing nations in addition to encountering top-ranked athletes from other disciplines, as well as made-to-measure educational support provided by the AFEV (Association de la Fondation Etudiante pour la Ville), which has over 8,000 student volunteers in France.

“Laura Flessel has embarked on a remarkable initiative,” affirms Arnaud Lagardère, the foundation’s chairman, “and we intend to provide long-term support so that she can take advantage of the athletic skills base and sporting facilities at our disposal. This support reflects our determination to boost the role of sports in disadvantaged neighbourhoods and to encourage young French hopefuls to achieve their full potential.”

* Between December 2005 and December 2007, Laura Flessel – with the assistance of her partners –offered 14 fencing clubs some 200 complete sets of equipment, including masks, jackets, gloves and foils. Provided after an in-depth study of the clubs’ situations, this equipment was targeted at organizations with limited resources and/or located in so-called sensitive neighbourhoods. The main Operation Ballestra partners were the Jean-Luc Lagardère Foundation, L’Oreal, Baume & Mercier, Escrime Diffusion and the Olympique Lyonnais.

About Laura Flessel
Born on 6 November 1971 in Pointe-à-Pitre, Guadeloupe, Laura was introduced to fencing at age six at the OMCS in Petit-Bourg. After acquiring a solid foundation on the Caribbean, Pan-American and Central American circuits, she joined the INSEP (National Institute for Sports and Physical Education) in 1990 after obtaining her baccalauréat (the secondary-school completion certificate, a requirement for leaving her native Guadeloupe). She became a member of France’s women’s epee team in 1995 and immediately set out to build her reputation at the World Fencing Championships in The Hague, where she won a bronze medal in individual epee and silver in team epee. The following year, she won a double gold at the Atlanta Olympic Games, where women’s epee was included in Olympic competition for the first time, and is currently No. 1 on the list of all-time French female medal winners, all disciplines combined.

To properly celebrate her arrival at Lagardère Paris Racing in September 2007, Laura brought the Paris-based club a team world-championship title, a victory at the Levallois Masters and an individual French championship title. She is currently vying to qualify for the Beijing Olympic Games (8-24 August 2008) and is aiming for the gold in individual epee.

The Jean-Luc Lagardère Foundation
The Jean-Luc Lagardère Foundation aims to generate excellence, nurture confidence and foster social cohesion in both the sporting and cultural spheres. With these goals in mind, the foundation supports talented young artists, creative minds and sponsors of social-solidarity projects. Its mission is to identify and help generate athletic and cultural excellence, to develop exceptional venues for sports and culture, and to engage in committed social activities within disadvantaged neighbourhoods. TeamLagardère and Lagardère Paris Racing are the cornerstones of the foundation’s commitment to sports.

TeamLagardère is an innovative provider of coaching assistance for top-level champions at its Paris Jean Bouin sports facility. It offers a centre for sports-related scientific expertise that brings together the most advanced levels of technical know-how in terms of research, training and coaching. It also aims to prepare young hopefuls at its Sophia Antipolis facility on the French Riviera by offering them a dual path towards excellence: sports performance and personal development. And it offers top-level athletes a personalized response by providing them with educational assistance and monitoring, training and retraining programmes, depending on their age and professional career path.

The Lagardère Paris Racing club is an ambitious project devoted to sports in Paris. With more than 18,500 members divided among 14 sporting divisions at two athletic facilities (La Croix Catelan and Eblé), Lagardère Paris Racing is Europe’s first multi-sport athletic club. Its mission is to further the practice of sports in the French capital in every form, from professional and high-level sports, supported by TeamLagardère’s expertise and training, to leisure-time and health-related sports as well as sports for those with disabilities. Its long-term mission is to develop the outlines of a new French sporting model, one focused on boosting the concept of high-level clubs.