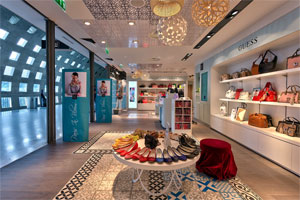 A second Bottega Veneta shop opened its doors in the building linking terminals 2A and 2C; the first store launched in July 2012 in terminal S4. In terminal A, a Lancel shop opened in May, and a multi-brand Buy Paris Collection women’s store. This shop began welcoming shoppers alongside a multi-brand men’s store that launched in late January – creating a 500-sq.m-plus fashion mecca, the largest in the airport. Another Buy Paris Collection shop operates in terminal C as a 140-sq.m multi-brand store.

Terminal F also hosted the opening of three new shops – Hugo Boss, Swarovski and a multi-brand women’s store – that round out this terminal’s dynamic fashion scene, which also features Hermès and Longchamp. Next on the agenda for SDA is the July opening of a Repetto store in terminal F, a world first for an airport!