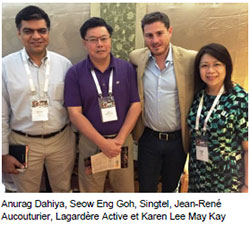 Parent company Lagardère Active and Asia representative Lightning International announced a major new agreement that was concluded at the latest Asia Pacific Pay-TV Operators Summit (APOS). The agreement will provide access to the Mezzo Live HD channel for all SingtelTV subscribers via the Family Starter Pack as of 12 June.

This not only marks the first agreement for Mezzo Live HD in Singapore, but also a major step forward in terms of the channel’s development in East Asia.Jean-René Aucouturier, sales director for Lagardère Active’s television channels, said: “We are thrilled to introduce Mezzo Live HD to Singapore’s television viewers. There is a clear appetite for classical music here, and the quality and diversity of our programmes will undoubtedly appeal to both seasoned music lovers and the less initiated. We look forward to extending our coverage to other major markets in SE Asia in the next few months.”

James Ross, CEO of Lightning International, the Asia-Pacific representative for Mezzo Live HD, added: “The channel has received a fantastic response from our partners and operators, and we will shortly be announcing a series of other new agreements throughout the region.”

Christophe Winckel, director of the Mezzo group, concluded: “Mezzo Live HD’s launch in Singapore marks yet another important step in our expansion in Asia. We are very pleased to have this opportunity to introduce a wide audience to the best in classical music, jazz and dance through our exclusive programming.
But we are also excited about the idea of developing content locally. With such venues as the Esplanade, which regularly welcomes Mezzo’s great partner orchestras (including the London Symphony Orchestra) and such attraction’s as Voilah! – Singapore’s all-new French festival -, there will be no lack of opportunities!”

Mezzo Live HD features the best in classical music and jazz – all in full high-definition sound – and co-produces over 80% of its content in the world’s most prestigious concert halls, such as the Paris Opera, Covent Garden in London, La Scala in Milan or the Bolshoi Theatre in Moscow.

The channel plans to ramp up initiatives aimed at broadcasting more local content in 2015, with new partnerships in the works in Australia, Japan, South Korea, Singapore, Hong Kong and Taiwan.

Mezzo has established itself as the benchmark for classical and jazz music and dance on television since 1996. Currently broadcast in 50 countries to some 28 million subscriber households, the channel strives to satisfy the most seasoned music lovers through a broad range of programming, including interviews, documentaries and other arts performances, while remaining accessible to the newcomer. Mezzo Live HD was intended to complement Mezzo's programming by focusing on the newest and greatest performances in the world of classical music, opera, dance and jazz.
Mezzo Live HD is managed by Lagardère Active Television.

About Lightning International
LIGHTNING INTERNATIONAL distributes a series of television channels, including Mezzo Live HD, TRACE Sports Stars HD, TRACE Urban HD and the Australia Channel. Additionally, the company distributes a full catalogue of programmes from Asia throughout the world, including both finished programmes and programme formats. The Hong Kong headquarters was established to offer organizations outside the Asia region a single platform from which they can launch or strengthen their presence among Asian viewers.