LS Travel Retail and Aéroports de Lyon have announced that they are opening six stores in their AELIA Duty Free line at Lyon St Exupéry international airport, with an AELIA Mode/AELIA Beauté shop on the landside. The opening of these retail outlets is the first phase in a new, large scale business project which forms part of a longstanding partnership between these two companies. 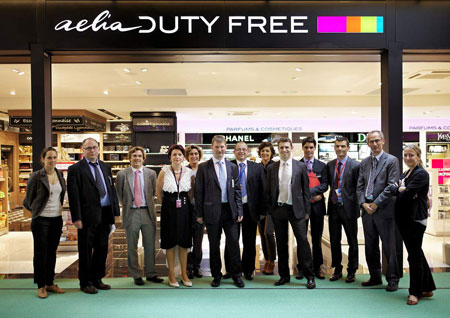 At 4:00pm on 20th June 2012, LS travel retail and Aéroports de Lyon will jointly open five new AELIA Duty Free multi-stores on the airside and AELIA Mode/AELIA Beauté, a shop which will be located on the landside.

This new concept will gradually be implemented nationally and internationally throughout the AELIA network during the course of 2012. 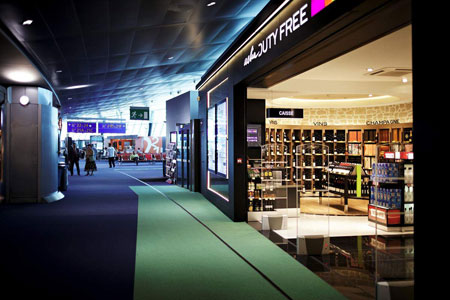 In some multi-stores, a section called “Escapade Lyonnaise” (Lyon Getaway) has been created. It is a nod to Lyon gastronomy; this gourmet stop invites travellers to enjoy the ambience of the “bouchons“, those well-known traditional local restaurants. The materials chosen (fittings in grey oak, slate, cement tiles, hammered zinc), the checkered floor, the walls decorated with friezes of black and white photos and corners dedicated to regional brands such as Sève or Voisin are particularly evocative of Lyon culture. These “Escapades Lyonnaises” also provide a place where you can sample the products; this really is somewhere where locals and tourists can meet each other.
These new shops are operated by Lyon Duty Free, a joint venture which was set up between LS travel retail, via its Aelia subsidiary, and Aéroports de Lyon on 1st January 2012. This joint venture, which is unique in the region, is piloting all the AELIA Duty Free and AELIA Fashion/AELIA Beauté stores that have been installed at Lyon Saint Exupéry airport, where more than 8 million passengers are expected in 2012.

Lyon Duty Free aims to develop Duty Free shops at Lyon Saint Exupéry airport by building on the expertise of both companies’ shareholders. A team of 70 employees is dedicated to managing the joint venture in order to maximise the commercial revenues.

Looking ahead to 2016, Lyon Duty Free is intending to continue these ambitious investments with the development of a new 2000m2 shopping centre at the intersection of terminals 1 and 3.

Michel Perol, Chairman and CEO of LS Travel Retail France made the following statement:
“I am confident that this partnership will prove to be an immediate success. At Lyon Saint Exupéry international airport, we are showing passengers that we are a modern international retailer with our AELIA Duty Free brand, while also valuing regional culture, something which Aéroports de Lyon promotes with great professionalism. Along with all the Lyon Duty Free and Aéroports de Lyon teams, I am personally very proud to be part of this venture.”

Philippe Bernand, CEO for Aéroports de Lyon made the following statement:
“This new organisation, encompassing the joint venture project Lyon Duty Free creates a real synergy between Aéroports de Lyon and Aelia LS travel retail, bringing together knowledge of the client base, product choice,…it allows us to fulfill the needs of our passenger customers and to share more than a simple customer/provider relationship. This partnership helps us to anticipate future developments of Lyon-Saint Exupéry airport, in particular the creation of a new Terminal T1 and T3 which will offer a 4500m² shopping centre, 2000 m² of which will be used by shops from 2016.”

Aéroports de Lyon, a private corporation since 2007, runs Lyon-Saint Exupéry for commercial aviation and Lyon-Bron for business and private aviation. Lyon-Saint Exupéry, France's third biggest airport, welcomed 8.4 million passengers in 2011. The airport offers direct flights to 115 destinations as well as quick and easy access to main European hubs. Fully interconnected, the airport serves as the fastest gateway to the Alps and is the preferred point of departure for passengers from the south east of France. Thanks to its 900 hectares of land, the 15 million inhabitants in its catchment area and the efficiency of its ground services the airport has fantastic potential for development and stands to become the second point of entry for aerial traffic in France. Lyon-Saint Exupéry is making use of its assets to develop its model of a city airport: its strategy for innovation, a quality of service recognized by the ACI association of European airports (Best Airport Awards 2008 and 2010), an investment plan of 260 million Euros over 5 years and its management of environmental impact. Our mission is to embody an airport that stands out. Fit for people. A place you would choose, but also a place of unique exchanges which encourages business.