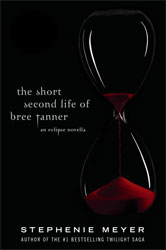 The Short Second Life of Bree Tanner: An Eclipse Novella
Novella originally conceived as short story for the Twilight Saga: The Official Guide

Little, Brown Books for Young Readers, a division of Hachette Book Group, has announced today that it will release the first new title from Stephenie Meyer in nearly two years. The Short Second Life of Bree Tanner is a novella told from the point of view of Bree, a character originally featured in Eclipse. The novella (at 192 pages) will be released at 12:01 a.m. on Saturday, June 5, 2010 in hardcover for $13.99 with a first printing of 1.5 million copies. One dollar for each book sold in the US from the first printing will be donated to the American Red Cross International Response Fund, which supports disaster relief efforts such as those in Haiti and Chile.*
“I’m as surprised as anyone about this novella,” said Stephenie Meyer. “When I began working on it in 2005, it was simply an exercise to help me examine the other side of Eclipse, which I was editing at the time. I thought it might end up as a short story that I could include on my website. Then, when work started on The Twilight Saga: The Official Guide, I thought the Guide would be a good fit for my Bree story. However, the story grew longer than I anticipated, until it was too long to fit into the Guide.”

As a special thank you to fans, Meyer is giving them exclusive access to the novel on a dedicated website, www.breetanner.com, from June 7 to July 5, 2010 where fans from around the world will be able to read the book online in English. “I’d always considered The Short Second Life of Bree Tanner as something for the fans,” said Meyer. “They have been so supportive of all things Twilight.”

Visitors to the dedicated site will also find a link to the American Red Cross website (www.redcross.org), where they can make a donation and learn more about their relief efforts worldwide. “I have been moved by the generous outpouring of support for the recent crises in Haiti and Chile,” said Meyer. “I am glad that sales of this book will support the American Red Cross with their amazing efforts abroad.”
“Fans have been waiting with bated breath for a new book from Stephenie,” said Megan Tingley, Senior Vice President and Publisher of Little, Brown Books for Young Readers. “We are doubly thrilled to be giving them the opportunity to read this exciting new work as well as contribute to an important cause at the same time.”
The Short Second Life of Bree Tanner is the riveting story of Bree Tanner, a newborn vampire first introduced in Eclipse, and the darker side of the world she inhabits. The novella chronicles the newborn vampire army’s journey as they prepare to close in on Bella Swan and the Cullens, following their encounter to its unforgettable conclusion.
The character Bree not only features prominently in the book Eclipse, but in the upcoming movie from Summit Entertainment. “Stephenie was gracious enough to let me read a draft of the novella while we were prepping the movie The Twilight Saga: Eclipse,” said Director David Slade. “I thoroughly enjoyed the story and it gave us great insight and inspired location choices and the tailoring of scenes. I think fans are going to love the fascinating details involved in the loves, fears and actions of an emerging vampire.”
The Short Second Life of Bree Tanner will also be available as an ebook beginning at 6:00 a.m. EST on June 5, 2010. Additionally, more information about the previously announced The Twilight Saga: The Official Guide, including publication date, will be released by the end of the year.
In less than five years, Stephenie Meyer has become a worldwide publishing phenomenon. The Twilight Saga’s translation rights have been sold in nearly 50 countries and 100 million copies have been sold worldwide.

*Donations to the American Red Cross from the US sales of The Short Second Life of Bree Tanner will continue until all first printing copies have been sold or at the end of a two-year period from the initial publication date, whichever is the first to occur.

The American Red Cross name is used with its permission, which in no way constitutes an endorsement, express or implied, of any product, service, company, opinion or political position.

ABOUT HACHETTE BOOK GROUP
Hachette Book Group (HBG) is a leading trade publisher based in New York and a division of Hachette Livre, the second-largest publisher in the world. HBG publishes under the divisions of Little, Brown and Company, Little Brown Books for Young Readers, Grand Central Publishing, FaithWords, Center Street, Orbit, and Hachette Digital.

ABOUT THE AMERICAN RED CROSS
The International Response Fund enables the Red Cross to provide shelter, food, counseling and other assistance to victims of disasters. On those rare occasions when donations exceed Red Cross expenses for a specific disaster, contributions are used to prepare for and serve victims of other disasters.